For artificial crew member of the ISS 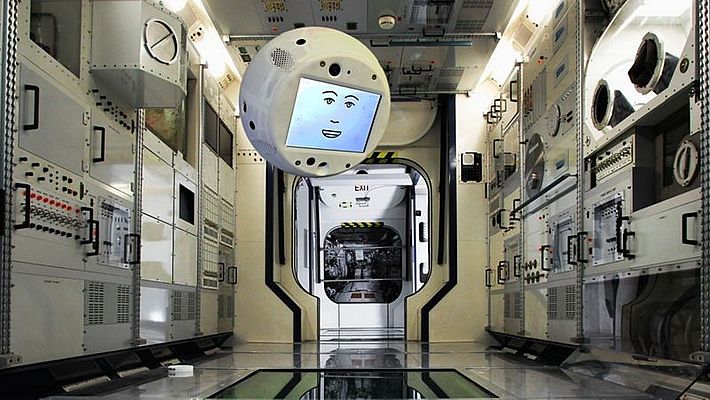 Faulhaber provided the "crew" of the Horizons Mission, embarked for the International Space Station (ISS), with its brushless DC-servomotors. They serve as the drive for the CIMON astronaut assistant (Crew Interactive Mobile Companion), a scientific project with the first artificial intelligence (AI) for the ISS. The free-flying technology demonstrator is intended to support astronauts during routine work by, for example, displaying procedures or offering solutions to problems. Its screen displays a friendly face, its voice and the AI make it a "colleague" to the crew members, with whom it can engage in a true dialogue. The mission companion is intended to, among other things, lighten the load during daily routine work and to function as an early warning system in the event of technical problems. The artificial assistant was developed on behalf of the Space Agency in the German Aerospace Center (DLR) by Airbus in Friedrichshafen.

The astronaut assistant of the CIMON project is approximately the same size as a medicine ball and weighs about five kilogrammes. In zero gravity, if floats freely in space and, on command, flies to the astronaut who needs its help. It moves by means of fourteen small propellers which transport it to the desired position and keep it there. They are driven by brushless DC-servomotors of the 0824 series from Faulhaber and controlled with Speed Controllers of the SC1801 series. The motors were selected on account of their reliability and longevity with very small dimensions, low weight and low energy consumption.

The Horizons Mission of the German ESA astronaut Alexander Gerst is planned for June–December 2018. The artificial intelligence of the technology demonstrator was developed using, among other things, voice samples and photos of him. Gerst will perform three tests with the mission companion: the astronaut and his assistant will experiment with crystals, together solve the Rubik's cube and perform a complex medical experiment in which CIMON will announce the individual steps and serve as an "intelligent" flying camera. While Gerst will return to earth at the end of the mission, the artificial helper will remain on board and lend assistance during future missions.

WE CREATE MOTION Drive systems from FAULHABER are masterpieces of precision engineering and electromechanics at the limits of the technically feasible. As pioneer and founder of a high-tech industry, the drive specialist is among the most innovative companies in Germany.

FAULHABER offers the most extensive range of miniature and micro drive technologies available from a single source worldwide. From high performance DC Motors, BLDC Motors, to Linear Motors, and Stepper Motors, each drive is designed to achieve maximum performance in minimum dimensions and weight. Matching precision gearheads, encoders, linear components and drive electronics are available to complete the system. On the basis of its technological diversity, FAULHABER designs drive solutions that are unique with respect to their precision and reliability in the smallest of spaces. Their main areas of use include production automation and robotics, aerospace, optical systems as well as medicine and laboratory technology.

Founded in 1947, the international group of companies is headquartered in Schönaich in the German state of Baden-Wuerttemberg, one of the economically strongest regions for industrial high technology in Europe. In addition to Germany, FAULHABER maintains development and production locations in Switzerland, USA, Sweden, Romania and Hungary. Moreover, there are sales partners and subsidiaries in more than 30 countries around the world. At present, the drive specialist has more than 1,900 employees, 600 of whom work at the Schönaich location in Germany.

Motors & Drives
Physicists are still uncertain about whether the universe really was created by the big bang. However at FAULHABER, we know exactly how successful applications start: With the spirit of innovation, engineering skill and our drive systems catalogue. Browse through the catalogue and discover a universe full of highly developed miniature and micro drive technology for a perfect start.
Read more

Automation
The FAULHABER's encoders of the Series IE3 are available as attachable kits or preassembled to FAULHABER DC-Motors CR and CXR Series, or as integrated assemblies for FAULHABER Brushless DC-Servomotors Series BX4
Read more