An AI for machine tool maintenance

Researchers at the Karlsruhe Institute of Technology (KIT) engineered a system for fully automated monitoring of ball screw drives in machine tools. It consists of a camera which is directly integrated into the nut of the drive generates images that an AI continuously monitors for signs of wear. The aim is to reduce machine downtime.

In mechanical engineering, maintaining, and replacing defective components timely in machine tools is an important part of the manufacturing process. In the case of ball screw drives, such as those used in lathes to precisely guide the production of cylindrical components, wear has until now been determined manually.

“Maintenance is therefore associated with installation work, which means the machine comes to a standstill,” says Professor Jürgen Fleischer from the Institute for Production Technology (wbk) at the Karlsruhe Institute of Technology (KIT). “Our approach, on the other hand, integrates an intelligent camera system directly into the drive, which enables a user to continuously monitor the spindle status. If there is a need for action, the system informs the user automatically.”

The new system combines a camera with light source attached to the nut of the drive and an artificial intelligence that evaluates the image data. As the nut moves on the spindle, it takes individual pictures of each spindle section, enabling the analysis of the entire spindle surface.

Combining image data from ongoing operations with Machine Learning methods enables system users to assess directly the condition of the spindle surface. “We trained our algorithm with thousands of images so that it can now confidently distinguish between spindles with defects and those without,” says Tobias Schlagenhauf who helped develop the system. “By further evaluating the image data, we can precisely qualify and interpret wear and thus distinguish if discoloration is simply dirt or harmful pitting.” When training the AI, the team took account of all conceivable forms of visible degeneration and validated the algorithm’s functionality with new image data that the model had never seen before. The algorithm is suitable for all applications that identify image-based defects on the spindle surface and is transferrable to other applications. 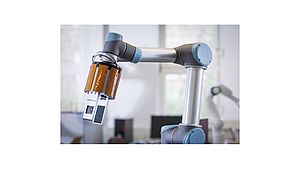 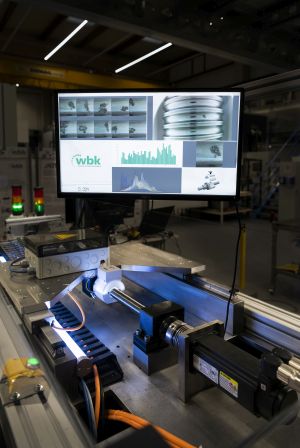 An AI for machine tool maintenance