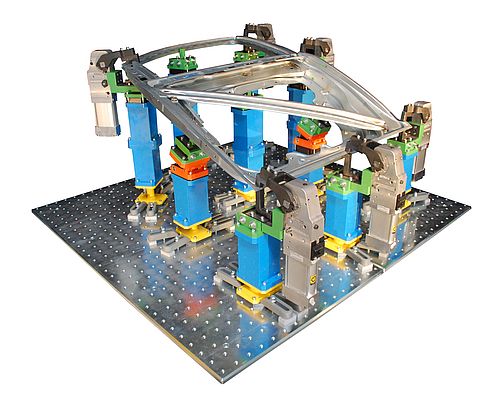 More and more varieties of automotive models are pene- trating the market, product lifespans are getting shorter, and energy costs are soaring. Above all, the protracted ramp-up time in auto body assembly are causing problems for manufacturers: They have to adapt production systems to each of the new parts and assemblies, which is highly time-intensive.

In order to put together individual elements, such as a door or a side panel, the manufacturers clamp the individual parts into model-specific clamping devices and weld them together. In doing so, precision is absolutely critical. "The not yet completely welded door is an unstable structure - if you adjust it at one point, then it deflects a different one. The employees have to calibrate the devices exactly, in order to set the part," says Marco Breitfeld of the Fraunhofer Institute for Machine Tools and Forming Technology IWU in Chemnitz. It can last several months for each new vehicle model until the system is set optimally. The pilot production run does not help in this regard. Because the fixtures used there have nothing in common with the ones used later.

The new device engineered at IWU allows already determined parameters to be directly transferred to serial production. "We hope to be able to reduce the start-up times by up to 50 percent," Breitfeld indicates. The procedure used is called "try-out," and is already applied to the reshaping process at the pressing plant. Special try-out presses determine, for example, the regulating variables for quality production beyond the serial process already - without interrupting the production process. The presses simulate the process parameters and the production environment of the regular system. Now, the scientists have transferred the process to car body assembly. "We are really breaking new ground here, and have transferred the principle of the presses to the clamping devices," the researcher says.

These contain four functional elements that are assembled similarly to a construction kit. With height modules, the console heights can be adjusted flexibly; the angle modules determine the angle of the clamping elements. Shim modules, specific surfaces of varying thickness, are used for fine-tuning. Workers have a maximum of ten millimeters of leeway in any direction. Through the modulus of rigidity, the researchers simulate how rigid the device would be if it were made of steel, aluminum or synthetic material.

At the yearly show preview, the lineup and major topics of Hannover Messe 2020 were rolled-out and illustrated. This year's edition will focus on 4 megatrends: digitalization, individualization, climate protection and demographic change
Read more