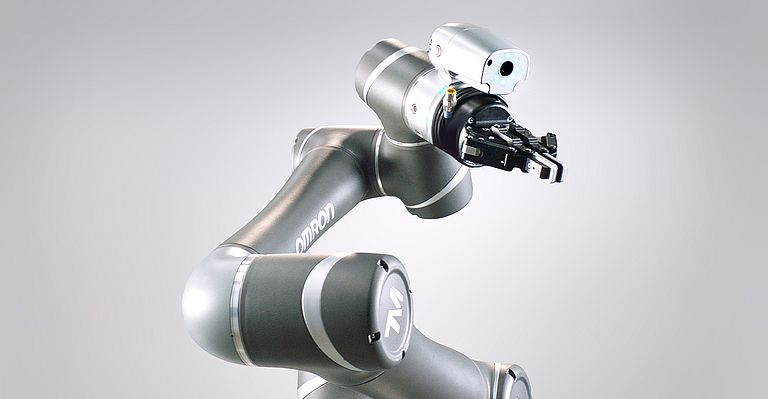 The TM collaborative robots from Omron aim to enable safe, flexible and collaborative manufacturing between human and machine. The TM series provides a solution to easily install a robot to automate applications such as picking, packing and screwdriving. Omron has launched 12 robots including a “mobile-compatible” one that seamlessly integrates into LD series autonomous mobile robot, enabling users to automate more complex tasks.

Safe cooperation between humans and machines

The flowchart-based intuitive programming interface and easy teaching requires little to no previous robot programming experience. The robots have a built-in vision and an integrated lighting, and can make inspection or measurement when equipped with image sensing functions. The TM series complies with safety standards ISO10248-1 and ISO/TS15066, allowing safe cooperation between human and machine without industrial safety fencing.

Automation
Can automate various applications such as picking, packing and screwdriving
Share with
Print
Advertise with us
More products from this supplier

Automation
Can automate various applications such as picking, packing and screwdriving
Read more

Automation
Can automate various applications such as picking, packing and screwdriving
Read more

Automation, Sensor Technology
As looking for a solution to automate the loading of a screen-printing machine with air/oil separators, Mann+Hummel decided to use a cobot as well as ArtiMinds Robot Programming Suite (RPS) software for the entire programming of the cobot.
Read more

Artificial Intelligence, Automation, Covid-19, Industry 4.0
If you didn't have the chance to join the live event, or want to listen again to any of the workshops or presentations, the on-demand version is now available until September 30, 2020
Read more
Request information