Geothermal Power Plant in Turkey Awarded for the Second Time 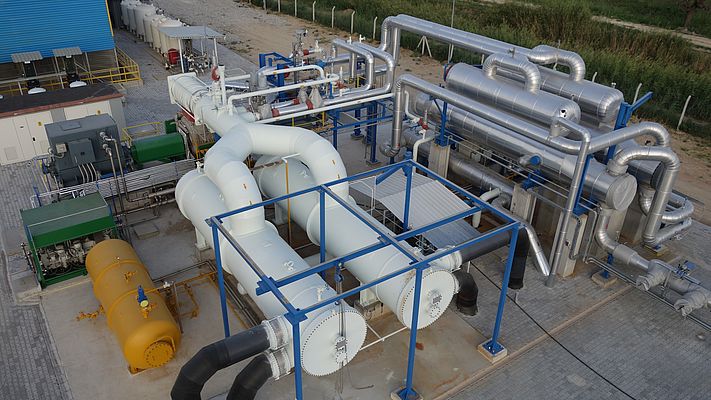 Geothermal Power Plant in Turkey Awarded for the Second Time

EXERGY Denizli Tosunlar ORC geothermal power plant was awarded for the second time this year as Top Plant in Renewable energy project category assigned by Power Magazine within their “Power Awards” competition. The prize has been announced and published in the December issue of the magazine. EXERGY conquered the stage for the leading-edge innovation represented by the world first geothermal power plant with 2-pressure-level cycle on a single-disk turbine installed in Denizli Tosunlar, Turkey, for the client Akca Enerji on June 2015.

A Jury composed of editors of Power Magazine selected Exergy’s project among many others from all over the world. Criteria for the selection of the winners included projects in 4 categories (Natural gas-fired , Coal-fired, Nuclear, Renewable projects) that distinguished themselves by innovative design or engineering upgrades, for producing power more reliably or economically than comparable plants, or demonstrating a new generation or environmental controls technology.

Claudio Spadacini, EXERGY CEO, commented on this repeated recognition for the Akca Enerji plant: “We are very proud to have received a second award this year for our Denizli Tosunlar power plant. This repeated recognition gives evidence of the technological breakthrough this plant represents and rewards the commitment and the effort that EXERGY brings into R&D activities to keep us at the forefront of innovation by achieving new, smarter and more efficient applications of our technology. We are constantly working on further advances in technology for the ORC market in order continue to evolve and sustain clean power generation”.

For over four decades, Power Magazine, one of the oldest and most trusted source of information for the power industry in U.S, has been honouring the top performers in the electricity-generating industry with their annual power plant awards.