Expected to expand by more than $1 billion in five years 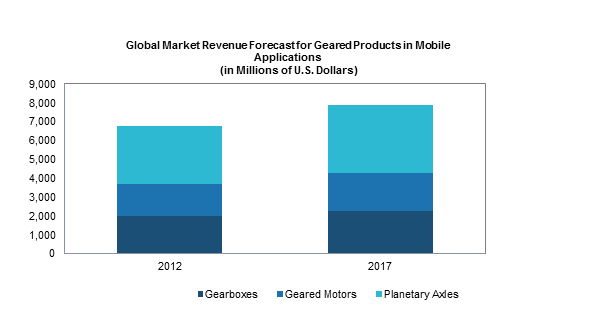 Suppliers of geared products for mobile industrial equipment applications can look forward to a 16 percent increase in total market revenue by 2017, according to a new report from IHS Inc. Revenue for gearboxes, geared motors and planetary axles sold for applications such as cranes, cement mixers and bulldozers is projected to reach $7.8 billion by 2017, up from $6.7 billion in 2012. Total market revenue is forecast to grow at a compound annual rate of 3.0 percent.

Planetary axles will lead the way in growth, as shown in the attached figure, with almost half of the additional market revenue from 2012 to 2017 expected to originate from this product category.
To be sure, overall market growth in 2013 is projected to be limited to less than 1 percent compared to 2012, due to the continued recession in Europe, economic softness in China and uncertainty in the U.S. economy. Nonetheless, revenue growth is anticipated to quicken in 2014 and 2015, with an estimated 63 percent of the total increase originating from the three sectors of agriculture, marine, and tracked and wheeled construction.
These growth sources are in contrast to the previous several years, when most expansion stemmed from the mining and construction sectors.