How to Achieve Zero Latency for AV over IP 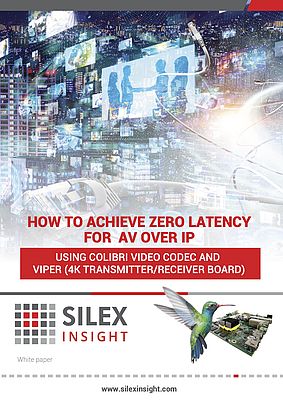 How to Achieve Zero Latency for AV over IP

Silex Insight. Standard audio video interfaces such as HDMI and Display Port are well suited for short range connectivity of multimedia equipment. However, larger AV (Audio/Video) installations with multiple sources and displays, or installations spreading over several physical locations need more evolved connectivity. For those AV installations, it has become obvious that IP networks is the most standard and future proof way of transporting the signals. Although IP-based networks enable the flexibility and scalability required by many applications, special care should be taken to keep the latency of the system sufficiently low for real-time, live use cases. This whitepaper will first define the latency for audio/video transport. It will highlight the usual architecture challenges of an AV over IP transmitter/receiver. A deeper analysis is provided regarding the video compression which is often mistakenly considered as adding too much latency. Eventually, actual latency measurements of the Viper 4K HDMI to IP transmitter/receiver will be presented. The latency of a system is the delay between the instant a sample enters the system and the instant it leaves the system. In an AV over IP system, it translates into the delay between the first pixel of a video frame entering the transmitter through the video input and the first pixel of the same video frame going out of the receiver on the video output. The latency is naturally defined in seconds usually in the range of milliseconds for a real-time audio-video system. Video experts also define the latency as the corresponding part of the video stream during that time. The latency is then described as a number of frames or lines of a video stream.