The second edition of the student competition Innovace, launched by ACE Stoßdämpfer, was won equally by two teams from Germany and The Netherlands 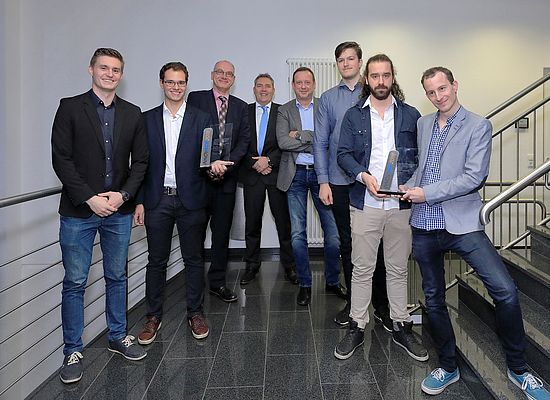 The second edition of student prize “Innovace”, launched by ACE Stoßdämpfer, went to two winning teams, who were celebrated during the ceremony held in late November. The jury declared a dead heat for their concept designs for a mechatronic retaining and releasing system. One team was comprised of Nico Graßmann and Rick Storm from the Fontys Venlo University of Applied Science (the Netherlands); the other of Mathias Blessing, Jannik Montag and Chris Taschelmayer from the Technical University Georg Agricola (Bochum, Germany). Both teams provided the technical evidence required in the call for tenders that their locking retainers with integrated damping and the releases using a smart phone as external control device work.

It was the first time that universities outside Germany competed with their designs and prototypes. Overall, the quality of the submissions was at such a high level that it was difficult for the five-member jury of ACE to declare winning only one team. This difficulty also resulted from the different approaches chosen by the teams that won the Innovace 2018 award in the end. While the elaboration from Bochum follows the classic, methodical development approach, the solution provided by the University of Venlo in the Netherlands also includes elements of product design and is more liberal in shape and idea development. André Weßling, responsible for global marketing at ACE and one of the initiators of this student competition stated: “The quality of all submitted papers is of such excellent quality that we are not worried about the future of young academics in Europe”.