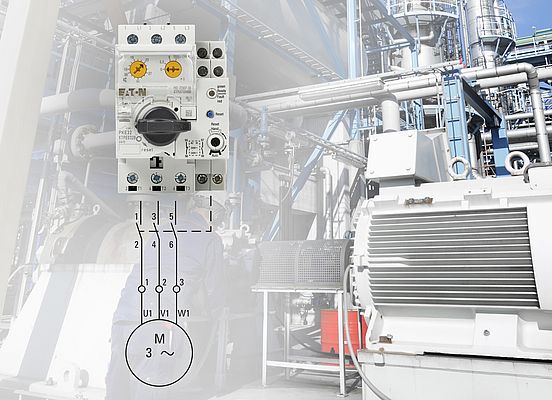 Before overload tripping can occur, the device LED on the PKE-XZMR indicates overcurrents in the load circuit. This makes it possible to implement predictive maintenance of the drive and thus reduces possible downtimes. The XZMR module is equipped with an N/C contact for the contactor and an N/O contact for the overload signal. The PKE-XZMR can be used both with the enhanced motor protection blocks (PKE-XTUA...up to 65A) as well as the enhanced system protection blocks (PKE-XTUACP...up to 65A).

The Module provides the PKE motor-protective circuit-breaker with two important convenience functions. The first is the possibility of predictive maintenance with an impending overload. In the event of an overload, the XZMR distinguishes between load currents greater than 100 percent and load currents greater than 105 percent, and indicates both with different flash frequencies via the integrated Status LED. Thanks to this early warning system, users can introduce preventative maintenance measures early in order to avoid any unnecessary downtimes.

The second convenience feature is the automatic restart of the motor after the contactor has tripped in the event of an overload. The type of restart of the XZMR module can be set directly on the device: In Auto mode, the resetting of the contactor after an overload is fully automatic, and is performed manually if the corresponding Manual setting is selected. As the switch position of the PKE remains unchanged in the event of an overload if Auto is set, the motor can restart immediately as soon as the module initiates the corresponding release signal. This saves valuable time and enables the simple autonomous monitoring of plants. If manual operation is selected, the fault signal has to be acknowledged before a restart by pressing the Reset button on the XZMR module. Manual mode is therefore particularly suitable for safety-critical applications.

“Power on Demand” for Energy Saving

How can you benefit from the ErP directive?

What do the IE3 motor changes mean for your business?

Motors & Drives
Eaton's EMS electronic motor starter for two operating directions, features integrated motor protection, is suitable for three-phase motors with a rated output of up to 3kW and is designed for small drive systems in standard and safety applications
Read more

Motors & Drives
The PowerXL DL1, Eaton's elevator drive, is designed for use with motors with up to 100 poles and PM motors. Its specific functions for elevators that make it easy to integrate it into new elevator systems and retrofit it into existing ones
Read more

Motors & Drives
Eaton's PowerXL DA1 Variable Frequency Drive for the machine and system building industry, is characterized by its flexibility in terms of communications protocols, and a function block editor (PLC) that makes it possible to configure the drive
Read more

Motors & Drives
The compact Eaton S811+/S801+ family of soft starters provides solid performance beyond the standard protective functions offered by most soft starters. This range of solutions increases productivity and lowers costs in applications with a set speed
Read more

Motors & Drives
Eaton's PKE two-component motor starter with electronic overload protection is made up of a DILM contactor and a PKE motor-protective circuit-breaker, rated for up to 15A and features plug-in terminals that make it easy to replace components
Read more

Automation
With SmartWire-DT the I/O level of the PLC is integrated in the switching devices. Eaton's XV HMI/PLC can access the digital and analog data from the control circuit device right through to the circuit-breaker. Gateway and I/O level are unnecessary
Read more

Motors & Drives
Always knowing the actual current consumption of each motor brings clear benefits. The comprehensive data supplied by Eaton's PKE via SmartWire-DT enables energy consumption to be optimized and diagnostics to be carried out effectively
Read more

From the Simple Oil Contactor to the Intelligent Lean Solution