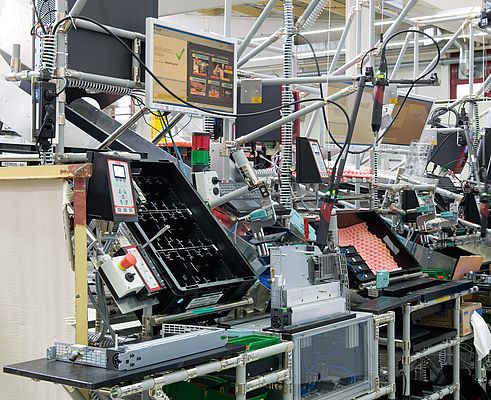 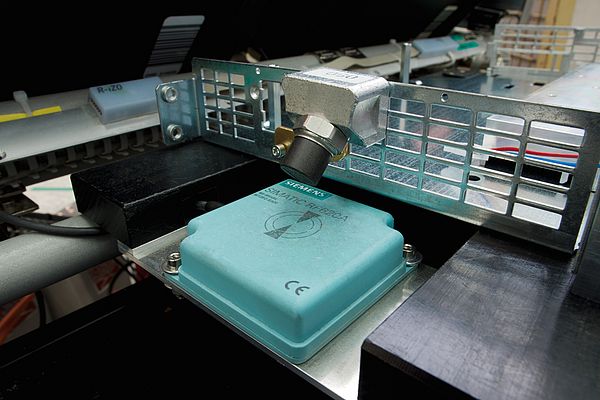 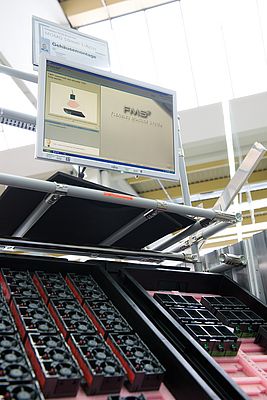 Siemens Electronics Manufacturing Plant in Erlangen (GWE in short) - recipient of the "Factory of the Year" award - continues to take innovative approaches. The managers responsible for the manual assembly of single- and two-axis motor modules of the modular drive system SINAMICS S120 have unlocked further potential for optimization. A major contributor in doing so is the latest RFID (radio frequency identification) technology: the SIMATIC RF600 - the high-performance UHF (ultra-high frequency) system by Siemens. With it, the repeated manual scanning of the device ID and almost all interactions with operator panels by the production staff could be eliminated. Thanks to the automatic capture and monitoring of the work progress, the process reliability is increased - thus assuring the quality.

Automation Approach for Assembly Islands to be newly set up

In the GWE, the assembly of information and power electronics for the product families SINUMERIK, SIMOTION and SINAMICS is organized into lean islands with multiple assembly stations. By adjusting the number of employees working at the island to the capacity needed, it is possible to flexibly respond to fluctuating user demands. These workstation systems required new means of communication between the employees and the production equipment, since the previously used method of manually scanning the data matrix codes would have increased the effort to identify the devices many times over. A way had to be found to reduce the number of scans to a minimum. At the same time, the production equipment was to automatically switch to the variant being produced. An operation by the production staff was to be no longer necessary.

A four-person planning team from the GWE came up with the idea to tackle this challenge with a multi-station-capable SAP-based system that features customizable Web interfaces and enables the control of production equipment as well as the automated, contactless identification of the devices via RFID. Thanks to the outstanding teamwork between production engineering, production and IT, the temporary support by RFID specialists from the Siemens head office in Nuremberg, and the early involvement of the production staff in the implementation and optimization of the workstations, a high-performance overall system could be developed and deployed for the series production.

Be reliable in a difficult Environment

On the one hand, the project team was challenged by difficult environmental conditions. On the other, the identification system for this new application had to be fast and networkable. The metallic surroundings - with changing reflections and thus interference caused by the different equipment and orientation of the drive modules - required extensive RFID reader parameterization options; preferably centralized for all system components over the site network. Furthermore, the read and write ranges had to be sufficiently long to give the employees adequate flexibility during the product handling. The UHF system SIMATIC RF600 was perfect for this - it can read and write data from distances as short as a few centimeters up to several meters. The powerful read/write devices RF670R with up to four antenna connections, rugged antennas RF620A and compact screw tags (data transponders) RF630T were determined to be the most suitable system components. The latter also was chosen over plastic transponders to rule out damage to the electronic components resulting from undesired electrostatic discharge (ESD).

With the new IT system in the lean islands, the networkable RFID readers could be directly connected to the Ethernet without additional PLC hardware. As a result, an automated, mistake-proof transfer of the devices between the assembly stations as well as a controllable sequence of wildly differing operation steps can be achieved with little effort.

The work contents of the newly created lean islands - one for single-axis and one for two-axis motor modules with a width of 50 mm as well as one for 100 mm modules - are each divided among five assembly stations so that the activities of the employees are line-balanced. At the first station, the IT system controls a so-called pick-to-light installation, which uses illuminated fields to show the employee the part that is to be picked up and fitted. At the subsequent stations, it coordinates multiple screwdriving controllers and stationary code readers SIMATIC MV420 ((image 4)) - likewise connected over Ethernet - for the identification/checking of the components to be installed in the devices.

The RFID transponders are mounted on magnetic holders, which are custom-made for the application. They are hung to the products prior to feeding and remain there until the end of the assembly process. The ERP-based IT system receives the assembly order and prompts the employee to insert a device into the first assembly station. There, a unique FID/item number is written to the transponder. Thereafter, the system automatically displays the associated process plan, detailed and illustrated work instructions as well as status information. All assembly steps are given or autonomously executed by the system - loading of screwdriving programs, activation of scanner, transfer of pick-to-light configuration, etc. - and then acknowledged. Inefficient manual actions - such as the scanning of labels or the selection of menu items via mouse, keyboard or softkeys on a touchscreen display - can thus be eliminated. Once the steps of an assembly station have been performed, the module can be removed and handed to the next station. There, the transponder is contactlessly read and the new process plan immediately displayed. Manual and automatic work steps take place chronologically according to this plan so that there is no chance of accidentally omitting a step, which would result in the assembly of a faulty module. The transfer of the product to the next workstation, including checking in and out at the system, proceeds without waiting times for the employee - thus ensuring a swift workflow.

At the line end, a type label containing a matrix code is printed and affixed. The completed motor modules can then be supplied to the electronic functional test. The transponders are now taken off and brought to the beginning of the line, where they are ready for the next products.

The managers responsible emphasize that the commissioning and fine adjustment of all RFID components can be performed with ease from a central location over the site network. There is no need for an inconvenient and time-consuming programming of each individual component on-site.

Another advantage: The RFID devices as well as the PCs and screwdriving controllers can be preconfigured ready-to-use. A possible exchange consequently does not necessitate specialized staff, which is a great convenience especially during night shifts.

Virtual Round Table - Digitalization on the Rise: Siemens

Automation, Industry 4.0
Digitalization has been a hot topic in the industrial world for years. Yet, the rate of adoption is still lower than expected and has just recently sped up. We interviewed 12 experts from 12 different IoT leading companies
Read more

Joint Solution for the Digitalization of Water Pumps

Industry 4.0
Grundfos, one of the world's leading manufacturers of sophisticated pump solutions, has taken a major step along with Siemens to ensure that such applications profit from the trend toward digitalization
Read more

Data Highway for the Internet of Things

Industry 4.0
Many concepts of digital transformation are based on information from the field level which, however, needs to be transported to the cloud via a powerful but also flexible and reliable network architecture
Read more

Automation
For companies in the process industry it is essential to respond swiftly to changing conditions. Companies today require flexible and space-saving solutions combined with outstanding usability. SIMATIC PCS 7 V9.0 has been designed to satisfy all these needs. The new version of this time-proven process control system stands out with its improved performance based on a consistent digitalization approach and more compact hardware. Delivering more flexibility and efficiency - in line with the tradition of "Performance you trust". HANNOVER FAIR 2018: HALL 9
Read more

A Sure Sign of Excellence: Top-notch Products Offering Added Value

Automation
Every Value Added Reseller in our network of Siemens Approved Partners knows exactly which Siemens products are most suited to your individual application - and how you can leverage real added value based on our products. Maximum stock availability, reliable delivery of products and systems, also supplied as attractive packages, are just as much part of their offer as specific modifications - all rounded off with first-rate technical support. See for yourself!
Read more

Automation
Certified technological competence and excellent industry knowledge. With a Siemens Solution Partner you'll be sure to achieve your goals faster and better
Read more

Automation
No matter what your specific task in automation or drive technology as well as power distribution calls for: Be sure to play it save by placing your trust in Siemens. Or in a sign that stands for for Siemens quality and expertise around the world: the sign of our Approved and Solution Partners. Thanks to their presence in our markets and proven expertise, our partners are the guarantee that all of your demands are fully met.
Read more

Sure Signs of Excellence

Automation
No matter what your specific task in automation and drive technology as well as power distribution calls for: Be sure to play it safe by placing your trust in Siemens.
Read more

Quality Assurance in the Product Development and Production Process

Manage Wireless Networks from a Central Location with IWLAN Controller

Easy Operation with all Fieldbuses and Controllers

Automation
No matter what your specific task in automation or drive technology as well as power distribution calls for: Be sure to play it save by placing your trust in Siemens. Or in a sign that stands for for Siemens quality and expertise around the world: the sign of our Approved and Solution Partners. Thanks to their presence in our markets and proven expertise, our partners are the guarantee that all of your demands are fully met.
Read more

Automation
Totally Integrated Automation, industrial automation from Siemens, is the name given to efficient interoperability of all automation components. The open system architecture covers the entire production process
Read more

Lenses for Suveillance of Coastal Erosion