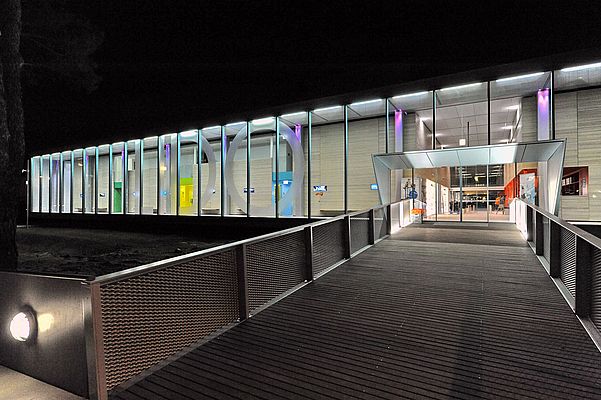 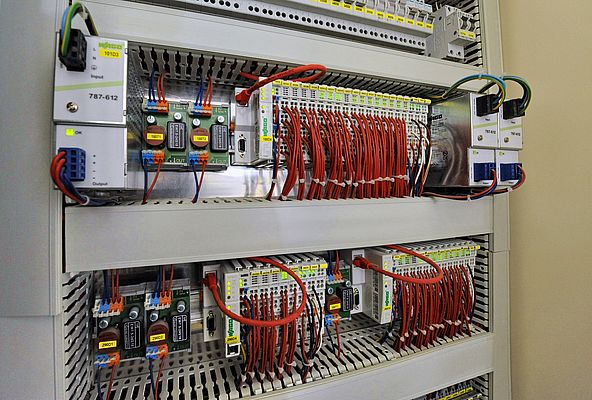 Control for the lighting and the HVAC systems was implemented using five local BACnet controllers. 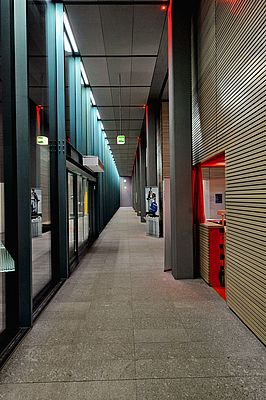 Lighting effects are also controlled via DALI modules at the BACnet controller: Projectors above the support columns change colors, from red (photo) to turquoise and blue. 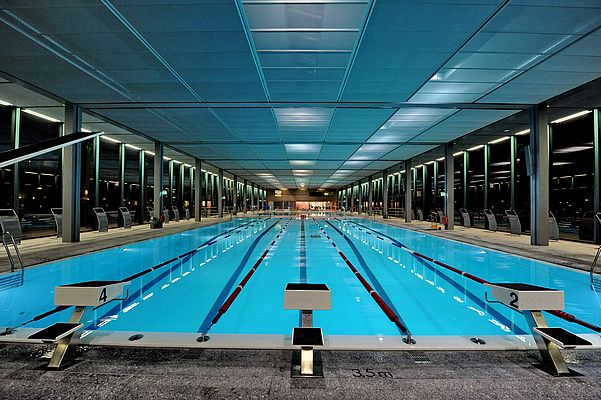 The operator can control and adapt the lighting for the indoor pool to match conditions and use of the pool. The non-glare, indirect lighting provides a pleasant atmosphere.

"Lido di Locarno" is a modern indoor/outdoor aquatic park in Tessin. Situated on the north shore of Lake Maggiore, this park with its superb location offers recreation, sports and well-being opportunities throughout the year. Not only was an appealing architecture important to the builders and architects of this park, they also insisted on flexible automation using Wago BACnet controllers.

The beauty and recreational value of Lake Maggiore in southern Switzerland was apparent to the inhabitants of Tessin back in the 1920s, when they built the Lido aquatic park directly on the lakeshore in Locarno. Despite the park experiencing extensive damage due to major flooding in 1978, 1993 and 2000, park guests remained loyal to their facility through thick and thin. After much consideration, the Lido park was finally closed in the fall of 2007 to make room for a new Lido. The new park, complete with spa, wellness area and sports facilities, will be completed this year.

Decentralized automation solution
The owner and operator of the indoor/outdoor aquatic park is an association consisting of 16 communities in the Locarno region, with the official title CBR - Centro Balneare Regionale SA. A number of different disciplines are to be incorporated into the automation sector: Access control, video technology, safety and security (fire, audio and emergency lighting), telephony via VoIP, visualization, pool systems, alarm systems and lighting with special effects, including lighting of escape routes. A request for tenders process was employed, with the owners deciding on Dipl.-Ing. Damiano Ulrich, of the Erisel SA engineering office, for elaboration of the lighting control and I&C technology concepts for best energy efficiency. Project management was assumed by Dipl.-Ing. Gianfranco Cavalli, managing director of BCS Building System AG, who worked in close cooperation with the project planner. Initially, automation was to be implemented as one complete project, but this approach proved to be to complex and non-flexible. A decentralized concept was chosen in place of a central automation concept. An Ethernet network links the various local control systems and provides communication with the control center. The central control system runs on a Sauter control system and communicates with the various systems via BACnet.

Flexible control system for lighting
The Wago-I/O System, with its various I/O modules for analog and digital signals and for integration of sub-buses such as Dali, fulfills all the requirements posed for a decentralized system. "The Wago-I/O System is a universal system with a good cost/performance ratio", reports Damiano Ulrich. Lighting control and HVAC control were implemented via 20 DALI lines and five BACnet controllers from Wago, along with a dozen Sauter controllers, which control and monitor nearly 600 data points. "Interaction between the control system and the BACnet controllers functioned perfectly", states Gianfranco Cavalli. "We received excellent service from Wago Contact SA". The Wago-I/O System supports both automatic and local access to parameters and setting menus. "One thing we have learned from experience is this: Despite all the sophisticated features built into an automation system, there are times when it must also be operated manually. Otherwise, commissioning would simply be too complicated", explains the project manager.

Energy Efficiency
For various primary currents up to 1,000 A
Read more