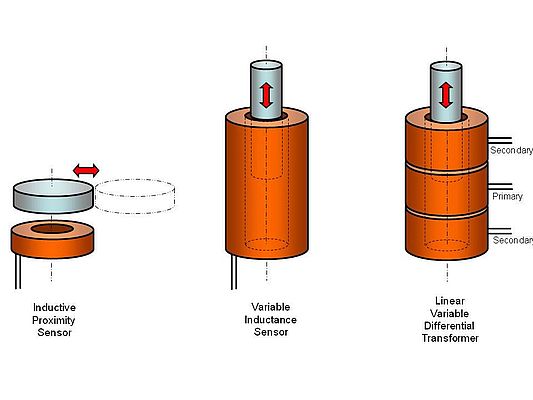 Inductive sensors are widely used to measure position or speed, especially in harsh environments. However, to many engineers, inductive sensor terminology and techniques can be confusing. Mark Howard of Zettlex explains the various types and operating principles, as well as their consequent strengths and weaknesses.

Inductive position and speed sensors come in a wide variety of shapes, sizes and designs. All inductive sensors can be said to work on transformer principles and they all use a physical phenomenon based on alternating electrical currents. This was first observed by Michael Faraday in the 1830s when he found that a first current-carrying conductor could 'induce' a current to flow in a second conductor. Faraday's discoveries went on to deliver electric motors, dynamos and, of course, inductive position and speed sensors. Such sensors include simple proximity switches, variable inductance sensors, variable reluctance sensors, synchros, resolvers, rotary and linearly variable differential transformers (RVDTs & LVDTs).

Various types
In a simple proximity sensor (sometimes referred to as a proximity or prox switch) the device is supplied with electrical power, which causes an alternating current to flow in a coil (sometimes referred to as a loop, spool or winding). When a conductive or magnetically permeable target, such as a steel disk, approaches the coil, this changes the coil's impedance. When a threshold is passed, this acts as a signal that the target is present. Proximity sensors are typically used to detect the simple presence or absence of a metal target and the electrical output often emulates a switch. These sensors are widely used in many industrial applications where electrical contacts in a traditional switch would otherwise prove problematic - notably where lots of dirt or water is present. You will see lots of inductive proximity sensors next time you put your car through a car wash.

Synchros measure the inductive coupling between coils as they move relative to each other. They are usually rotary and require electrical connections to both moving and stationary parts (typically referred to as the rotor and stator). They can offer extremely high accuracy and are used in industrial metrology, radar antennae and telescopes. Synchros are notoriously expensive and are increasingly rare nowadays, having mostly been replaced by (brushless) resolvers. These are another form of inductive detector but electrical connections are only made to windings on the stator.

LVDTs, RVDTs and resolvers measure the change in inductive coupling between coils, usually referred to as primary and secondary windings. The primary winding couples energy into the secondary windings but the ratio of energy coupled into each of the secondary windings varies in proportion to the relative displacement of a magnetically permeable target. In an LVDT, this is usually a metal rod passing through the bore of the windings. In an RVDT or resolver, it is normally a shaped rotor or pole piece that rotates relative to the windings arranged around the periphery of the rotor. Typical applications for LVDTs & RVDTs include hydraulic servos in aerospace aileron, engine and fuel system controls. Typical applications for resolvers include brushless electric motor commutations.

Applications
Inductive sensors have a long track record for reliable operation in difficult conditions. Consequently, they are often the automatic choice for safety related, safety critical or high reliability applications. Such applications are common in the military, aerospace, rail and heavy industrial sectors. The reason for this solid reputation relates to the basic physics and principles of operation, which are generally independent of:

- foreign matter such as dirt, grease, grit and sand.

Strengths & weaknesses
Due to the nature of the basic operating elements - wound coils and metal parts - most inductive sensors are extremely robust. Given their solid reputation, an obvious question is 'Why are inductive sensors not used more frequently?' The reason is that their physical robustness works as both a strength and a weakness. Inductive sensors tend to be accurate, reliable and robust, but also big, bulky and heavy. The bulk of material and the requirement for carefully wound coils makes them expensive to produce, especially high accuracy devices that require precision winding. Besides simple proximity sensors, the more sophisticated inductive sensors are prohibitively expensive for many mainstream, commercial or industrial applications.

Another reason for the relative scarcity of inductive sensors is that they can be difficult for a design engineer to specify. This is because each sensor often requires the associated AC generation and signal processing circuitry to be separately specified and purchased. This often requires a significant amount of skill and knowledge of analogue electronics. Since younger engineers tend to focus on digital electronics, they will regard such disciplines as an unwanted 'black art' to be avoided.

Next generation devices
However, a new generation of inductive sensor has entered the market in recent years and has a growing reputation, not only in the traditional markets, but also in industrial, automotive, medical, utility, scientific, oil and gas sectors. This new generation of inductive sensor uses the same basic physics as the traditional devices but uses printed circuit boards and modern digital electronics rather than the bulky transformer constructions and analogue electronics. The approach is elegant and also opens up the range of applications for inductive sensors to include 2D & 3D sensors, short throw (<1mm) linear devices, curvilinear geometries and high precision angle encoders.

Zettlex technology is the forerunner of this new generation inductive technique and has grown over recent years thanks to some high profile design wins. The use of printed circuits enables sensors to be printed onto thin flexible substrates, which can also eradicate the need for traditional cables and connectors. The flexibility of this approach - both physically and from the ability to readily provide customised designs for OEMs - is a major advantage of this new approach.

As with traditional inductive techniques, the approach offers reliable and precision measurement in harsh environments. There are also some important advantages:

- Simplification of the electrical interface - typically a DC supply and absolute, digital signal.

This is illustrated in Figure 2 - showing a traditional 150mm stroke LVDT and its new generation replacement, which has been produced for a manufacturer of linear actuators. The parallels to the 'before' and 'after' dieting photographs are obvious. This is reinforced when one considers that the new generation device also includes the associated signal generation and processing circuit (not shown with the traditional LVDT). By way of comparison, the Zettlex device offers:

Automation
Include a choice of 600 different products
Read more

Why Do Engineers Dislike Potentiometers?

Vision & Identification
Traditional rotary encoders can be readily fitted to shaft diameters of less than 5cm, but what happens if your design needs a much larger diameter through shaft or bore
Read more

Electronics & Electricity, Sensor Technology, Test & Measurement
A series of actions to support the crisis by expediting production of its healthcare
Read more

Sensor Technology
Food processing presents numerous safety challenges that can be overcome by designing not only intrinsically but also ''extrinsically’’ safe machines, able to give the system an overall safety rating
Read more