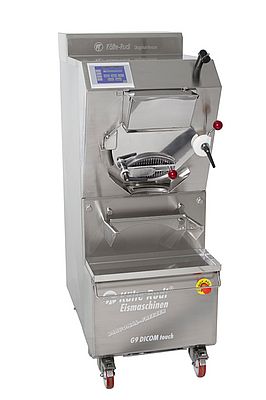 The Diagonal-Freezer – an ice cream machine from Kälte-Rudi – is characterised by its patented design featuring a diagonally installed production cylinder and paddle with kneading function. 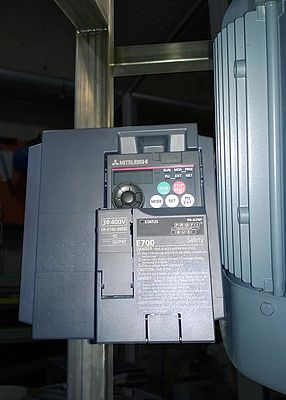 With the Mitsubishi Electric FR-E700 series frequency inverter, the Diagonal-Freezer now even continues operation when the motor reaches its performance limits. 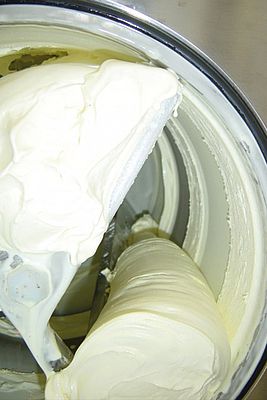 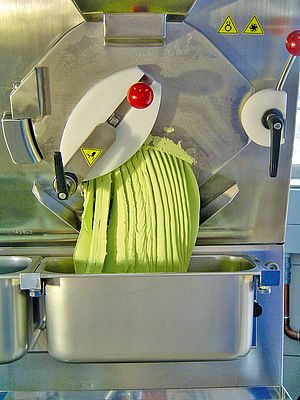 The Diagonal-Freezer produces creamy ice cream with optimum volume, storage stability and shelf life as well as minimal residual water and no recrystallisation.

Whatever the flavour - a classic such as vanilla, strawberry or chocolate or an experimental flavour such as orange-basil, lime blossom-caramel or sour cream-cress - the important thing is that the ice cream parlour will always be able to serve creamy, firm ice cream. It should melt delicately on the tongue without being watery and it should have an intense yet natural flavour. The traditional method of production used by ice cream manufacturers demonstrates true craftsmanship. Special machines are used to ensure the automated production of ice cream of correspondingly high quality. Under no circumstances should an unscheduled stop of the ice cream production process be allowed. If the paddle motor were to stop working and disrupt the kneading and freezing process, the dairy product would no longer be fit for use. Additives such as milk and flavourings as well as water and electricity would then be wasted. In order to eliminate this risk, Kälte-Rudi - the market leader in the manufacture of ice cream machines - installed the compact Mitsubishi Electric FR-E700 series frequency inverter in its Diagonal-Freezer, first of all on a trial basis. The powerful reliable inverter was a great success and not just on account of its integrated stall protection. Following this experience, the company decided to use the Mitsubishi Electric components in its ice cream machine as standard. In addition, the company plans to use the inverter in other machines as well.

High-end drive power
Founded half a century ago, Kälte-Rudi's wide range extends from ice cream machines up to pasteurisers and cream pasteurisers. Its mobile machines are mainly used by ice cream parlours, bakeries, confectioners and commercial kitchens. The medium-sized company from Baden-Württemberg markets its "Quality made in Germany" all over the world.

The Diagonal-Freezer - an ice cream machine from Kälte-Rudi - is characterised by its patented design featuring a diagonally installed production cylinder and agitator with kneading function. The machine produces creamy ice cream with optimum volume, storage stability and shelf life as well as minimal residual water and no recrystallisation. The Diagonal Freezer can process between four and 16 litres of liquid ice cream mixture per production process, depending on the model. Markus Moosmann, Technical Director Electrical Engineering at Kälte-Rudi, describes the process: "The first step as part of the traditional method of producing ice cream involves pasteurising the additives. It would, of course, also be possible to use an already pasteurised finished mixture as a base for adding flavouring. However, for most of our customers it is important to produce their own ice cream mix, as it is an essential part of their craftsmanship. Afterwards the liquid is poured into the ice cream machine. During the process, air is bound into the liquid in order to give the ice cream its creamy consistency as well as more volume. Larger machines with a four-cylinder compressor can process up to 16 litres of mix, producing 20 to 25 litres of ready-to-eat ice cream."

The drive can often be pushed to the limit as ice cream is difficult to handle. Compared with supermarket ice cream, traditionally produced ice cream is considerably firmer and ideally contains a lot less water. When the machine is mixing several litres of ice cream, it is only the movement of the ice cream that keeps it "liquid". If the paddle should stop working, the viscous mass would turn into a solid block of ice that would have to be defrosted in order to remove it from the machine. Like any dairy product, you can't refreeze ice cream that has melted as otherwise there would be a risk of salmonella forming, for example. So if the motor has stopped unexpectedly during the mixing process, the product would be rendered useless. Besides this the ice cream maker would also have wasted all the additives used, as well as the power for the drive and water for cleaning.

Stall prevention in overload range
In order to finally solve this recurring problem, the automation experts from Mitsubishi Electric recommended that the machine builder should test inverters from the FR-E700 series. The integrated stall prevention ensures that the paddle can continue to turn even when the motor is operating within its overload range, as the inverter reduces the output speed for a short time.

First of all, Kälte-Rudi installed an FR-E740 in a prototype and carried out numerous intensive tests. Markus Moosmann explains: "Optimum quality and performance are the bases of our company philosophy. That's why we were open to carrying out a test run with the Mitsubishi Electric frequency inverters to improve the efficiency and availability of our machines. Tests have shown that the stall prevention can be used to control overloading. If the motor ever goes into its overload range, the inverter will continue to operate at a reduced speed, so the mixing of the ice cream continues and the product remains intact."

With the FR-E700 series inverter, the machine now even continues operation when the motor reaches its performance limits. As a result, the availability of the machine and production efficiency have been improved. Finally, the resource-saving inverter has indirectly contributed to the achievement of savings on additives, power and water consumption. That is important for smaller businesses such as ice cream parlours in particular.

That certain something extra
Kälte-Rudi uses the FR-E720 for 200- to 240-volt operation and the FR-E740 for 380 to 480 volts in its Diagonal Freezer models. The FR-E700 series covers a power range of 0.55 to 7.5 kilowatts and can withstand high thermal loads of up to 105 degrees Celsius. Sensorless current vector control permits a particularly high level of torque of more than 1:200, especially at the start and end of the process. The speed can be set precisely within a wide range. In addition, the series has a Profibus connection via the optional FR-A7N communication card. The card along with its cover can be connected to the inverter quickly and easily.

Besides stall prevention, the inverter enables a measurable reduction in power, between 15 and 40 per cent depending on the machine and its configuration. "A maximum potential saving on power of 40 percent is quite respectable for motors with an output of up to six kilowatts," remarks Markus Moosmann, who continues: "The Mitsubishi Electric component is much more sophisticated than the competing product that we have used before. The integration, handling and adding optional additional functions such as the Profibus connection are very easy via the connector system. The products are also extremely stable and have convinced us even under the harshest operating conditions. The service provided by Mitsubishi Electric has a strong customer focus. Its employees have a high level of technical competence and respond quickly to our requests and this is supplemented by high product availability. In addition, Mitsubishi Electric's global service network covers all our markets, which is a major advantage if service is required."

Functional requirements met
The network capability with the Profibus connection was particularly important to Kälte-Rudi. It enables the machine building experts to monitor the operation of the inverter in real time at any time. If a problem should occur, the service engineer can tackle it on site by simply connecting a single programming cable to the HMI. No additional special cable is required. Diagnostics blocks can be programmed and any data can be read out via the software immediately.

The integrated safety-off function in accordance with EN 12855 enables a high level of operational safety as the control and regulation circuits of the inverter operate independently from each other. For emergency cases, it provides a safe and direct stop of the paddle.

Outlook for the future
Kälte-Rudi began working with Mitsubishi Electric in mid 2012. Now the Diagonal-Freezer is equipped with the FR-E700 series inverters as standard. There are plans to expand collaboration further. Due to the very good results with a prototype pasteuriser, also using an FR-E720, the company plans to use the inverter as standard for this machine by the end 2014. The machine will be completely rebuilt because, until now, a frequency inverter for the pasteuriser was available only as a chargeable option. Thanks to the high level of performance and stability of the inverters, it is possible to use a smaller motor. This reduces costs and energy consumption while retaining the same level of performance. As the next step, modifications to the cream pasteuriser are planned, starting with the building of a prototype. In the medium term, Kälte-Rudi is also intending to use Mitsubishi Electric operating panels and possibly a Mitsubishi Electric control system too.

Machine builder Kälte-Rudi has also started work on the development of an ice cream filling machine. With this machine, ice cream makers will be able to offer their classic and extravagant ice cream creations in takeaway boxes, so that they can be easily enjoyed at home. The company is also keen to work closely with Mitsubishi Electric on this project. "The filling machine is a totally new invention, which is currently not available on the market in this way. It will give the automation experts from Mitsubishi Electric the chance to demonstrate their development skills again. The task of filling containers with high-quality, firm ice cream ready for sale is definitely a tricky one," says Markus Moosmann.