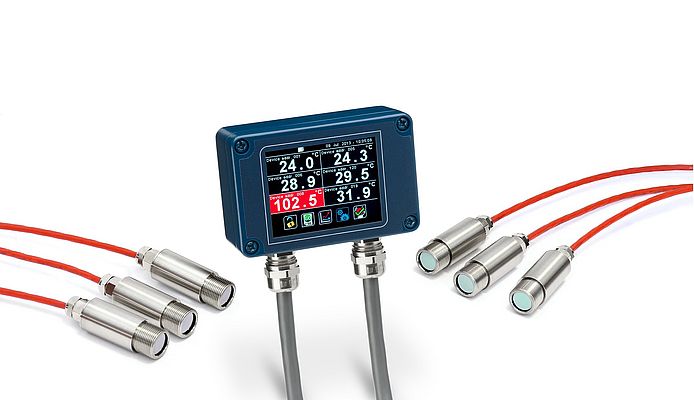 Calex Electronics is proud to announce the release of the PyroMiniBus, a simple system of infrared temperature sensors and interface modules engineered to make multi-point industrial temperature monitoring easier and more affordable.

The miniature non-contact sensors measure the surface temperature of products and machinery in industrial processes, and send the measurements via RS485 Modbus to a touch screen display.

Despite the potential improvements in product quality, production rate and safety that temperature monitoring can bring, as well as reduced waste and running costs, the size and price of existing systems has held some companies back from specifying new measurement equipment.

"By miniaturising the sensors and removing the need for signal conditioning electronics, we have simplified the system to a small, affordable set of parts. It is easier to fit the sensors into small spaces, and they weigh a lot less now. By using digital sensors the cable network is much simpler. Machine builders especially will see a huge benefit with the PyroMiniBus, and it is easy to retrofit too."

There are just four main parts to the system: a choice of two temperature sensors for measuring small or large targets, a six-channel touch screen for configuration and data logging, and a junction box to connect them all together. Installing the system is as simple as wiring up the junction box and connecting a power supply. Relay and analogue outputs can also be added with separate modules.

The system is not limited to measuring just six locations: larger networks of sensors and interface modules can be connected as slave devices to an alternative Modbus Master, such as an existing supervisory control system.

The ability for sensors to withstand high ambient temperatures has also improved. The new sensors will operate in conditions of up to 120°C with no need for cooling, such as locations close to ovens, dryers and preheating equipment, along with many other general-purpose applications.

The PyroMiniBus system is available to order now from Calex and their distributors worldwide.

Calex Electronics Ltd was established in 1973 and specialises in the design, manufacture and sale of non-contact infra-red temperature sensors and electronic power converters.

Test & Measurement
Can measure as low as 350°C
Read more

Test & Measurement
Can measure as low as 350°C
Read more