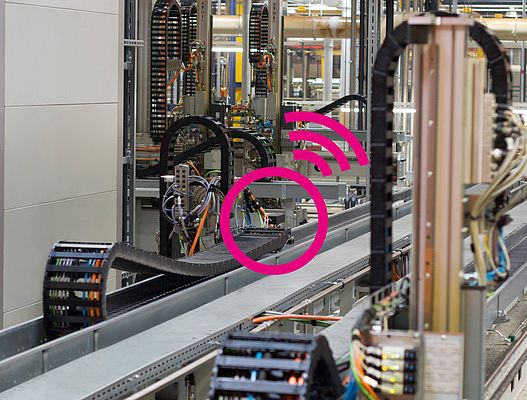 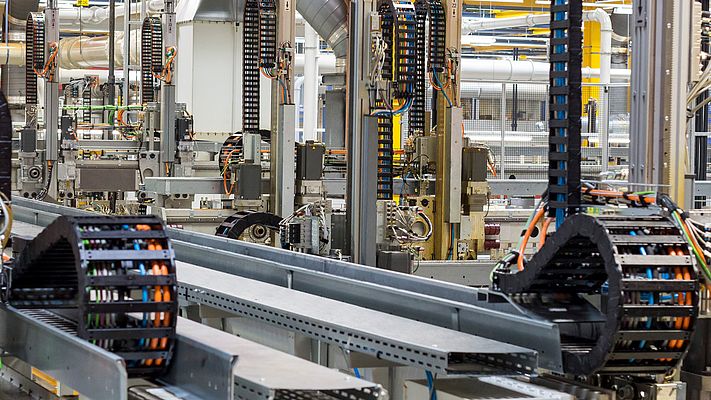 In almost no other industry is reliability as important as the automotive industry. Whole vehicles or even individual components such as the engines go through production lines with a very high degree of automation. If production stops here, it quickly leads to expensive losses. Therefore, it is important for vehicle manufacturers and suppliers to be able to rely on reliable components. An Austrian engine manufacturer chose 'smart plastics' from igus. Sensors measure wear during operation and alarm the user early enough to plan a repair or an exchange.

Site: engine plant in Austria. Application: indoor linear robot for the automated handling of engine blocks. The energy chain systems used on the linear robots run with high dynamics almost continuously in 18 to 19 shifts per week. At peak times, more than 6,000 engines are produced at the factory; on average, one engine runs off the assembly line every 14 seconds. The energy chain systems of the handling linear robots quickly reach millions of cycles.

In order to minimise weight and noise compared to steel chains used to guide the moving cables on the linear robots, the manufacturer relies on plastic energy chains from the motion plastics specialist igus. But these are not their only advantages: due to the increasingly important topic of "predictive maintenance" in the industry, igus has been developing the so-called "smart plastics", intelligent plastic products, for some years now. "This product family, which we have grouped together under the brand name 'isense', comprises various sensors and monitoring modules by which, for example, the energy chain systems from igus can be equipped," explains Michael Blaß, authorised officer, e-chainsystems at igus. "Thanks to the digital networking of machines and products, it is possible to continuously record the condition of components and report them as soon as a repair or replacement is required." This makes it possible to avoid unplanned plant downtimes and thus expensive production losses.

The company igus presented its smart plastics for the first time at the 2016 Hannover Messe. Good timing, since there was also a need for action at the engine plant in Austria at that time and thus the people responsible for the project "Smart Maintenance" became aware of igus. Known as a manufacturer of energy chain systems and a reliable partner, igus soon received the request for smart plastics. After initial discussions on this topic - with both the Austrian colleagues and the design engineers in Cologne - the first tests were started a few months later, in August 2016.

In this beta test, among others, the isense EC.W ("W" for "wear") abrasion monitoring system was used: a sensor chip installed in the crossbar of the e-chain continuously measures the condition of the sliding e-chain during the travel: if the abrasion has progressed so far that the end of the service life of the chain is approaching, the sensor will respond and trigger a signal. However, the abrasion of energy chains made of high-performance plastics has not progressed so far that it has ever come to an emergency notification.

Much more decisive here is the use of the isense EC.B modules ("B" for "break"). With the help of a polymer wire (running within the energy chain) and a sensor unit, they monitor the condition of the chain. Here, in the past, there were no complaints to be detected in the visual monitoring of the energy chain systems, but the chain failed two weeks later. This can be prevented by the break monitoring. At the beginning of the beta phase, however, a lot of fine tuning had to be done. Because, the temperature in a workshop has a great influence on the length of the chain and thus on the pre-load of the polymer wire. Here it was necessary to determine limit values in order to distinguish between "normal" expansions and actual incidents.

At the Austrian engine plant, igus' isense modules have already been chosen the innovation of the month. Currently, there are considerations and plans to equip around 50 to 60 energy chain systems from igus with break monitoring. In the case of the three test systems, one is already at the point where the system must remain in real operation and the responsible machine setters must act. After a visual check, they can decide if it was a false alarm or if there is a real need for action. In this way, expensive consequential damage can be avoided even during the current beta phase and the linear robots can be safely moved.