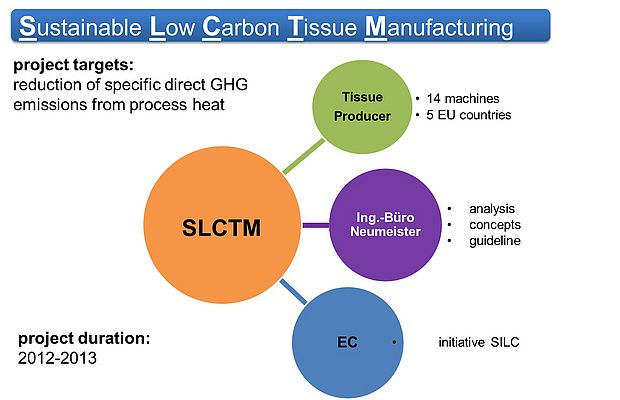 Reducing greenhouse gas emissions is one of the top targets within EU climate policy. The European Emission Trading System (ETS) is one of the most important mechanisms to create an incentive in industry to develop low carbon technology and to implement state of the art techniques to reduce CO2 emissions.

Besides the opportunity to develop low carbon technology and thereby create new business sectors in producing and services the ETS also has an impact on the production costs. Since weaken the European industry cannot be a target of the EU climate policy the SILC initiative was founded. The SILC initiative shall support energy intensive productions and industrial services to develop low carbon concepts and technologies. It thereby helps industry to move faster in lowering their CO2 emissions and compensates the side effects of ETS. The SILC initiative is parted into two steps. The first step SILC I projects started in 2012 and 2013 and was focused on using Best Available Technology (BAT) and Best Practice (BP) to lower direct CO2 emissions in different industrial sectors. Among 7 other projects the Sustainable Low Carbon Tissue (SLCTM) project was one of them. The main target of the SLCTM project was to develop CO2 reduction concepts for the tissue industry and to publish a guideline in 2014 to open project experiences for other companies.

The cooperative tissue producer is one of the largest suppliers of tissue products in Europe and the market leader in the Nordic countries. The company is also a leading supplier of cooking and baking parchment papers worldwide. The producer has eleven production sites, of which seven were within the SLCTM project. One in Finland, one in Germany, one in Poland, one in Slovakia and two located in Sweden. In total the production of all sites is about 630,000 tons per year, of which 600,000 tons in the manufacture of tissue products. Sustainability is an issue that takes the tissue industry very seriously.

As already mentioned the Sustainable Low Carbon Tissue Manufacturing (SLCTM) project was founded under SILC I and was a cooperative project between Ingenieurbüro Neumeister and a large European tissue producer.
Ingenieurbüro Neumeister is a young engineering office located in Neuwied, Germany. The company was founded in 2006 by Dr.-Ing. Jens Neumeister. Since then a small team of young engineers offers services in energy efficiency projects for industrial sectors and energy production. The company is also specialized in all areas of the European Emission Trading system.

Within SLCTM the team of Ingenieurbüro Neumeister analysed seven production sites with 14 tissue machines in total and designed low carbon concepts for each machine. Using process modelling was one of the keystones within SLCTM to balance the production and to create suitable concepts for the cooperative tissue producer (see figure below).

As the methodology shows the first step was to define the targets. For SLCTM this was the reduction of direct CO2 emissions. For tissue production this means the usage of fuels to generate steam and direct fuel for thermal tissue drying. To define the system boundaries was the next important step. The mill boundaries were the project boundaries within SLCTM. That means only processes located in the mill were analysed. The subsequent macro analysis was performed to get a rough balance and to identify open points in the balance. Within the much more detailed following micro analysis all relevant processes responsible for direct CO2 emissions were analysed in detail. This step was supported by measurements and data from process systems.

The process topology and all relevant figures were now put into a baseline model to balance the process. Based on a wide research in Best Available Technology (BAT) and Best Practice (BP) in tissue industry a catalogue of measures has been created. This catalogue was needed to find possible technical changes within each machine. To design the technical concepts in the first step all possible technical changes identified by the catalogue were evaluated using the baseline model and evaluated by so called What-If scenarios. Those What-If scenarios show the impact on the energy usage of the total process if a technical change was done. Not only a single technical change was modelled but also every possible combination of all relevant technical changes were simulated. Followed by an economical benchmarking the optimal concept could be chosen. Since the whole process was iterative several steps of course had to be done multiply.

To benchmark every possible combination the product benchmark for tissue within the ETS system was used. The following figure shows the total production and the ETS benchmark of product within European paper industry. As one can see the tissue industry has the highest benchmark of all defined benchmarks, with 334kgCO2 per ton of tissue.