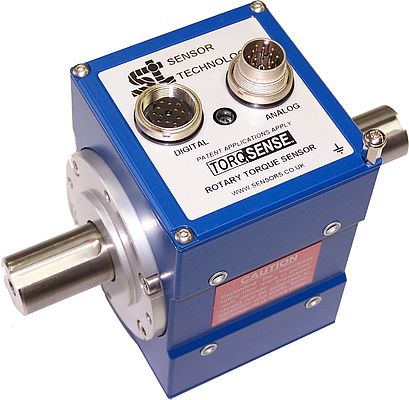 Technology transfer may prove one of the cornerstone engines for growth as the UK emerges from recession over the coming months. Sensor Technology in Oxon are virtually addicted to the habit, so we asked their Tony Ingham how it has shaped the company’s development and what the future holds.

Wireless became one of the buzzwords of the late Noughties, and ‘wireless’ got our grandparents’ generation excited too in the 1940s. But between those periods the word was not much used – except at Sensor Technology around the turn of the Millennium.

“We’d identified a way to measure the torque in a rotating shaft without maintaining physical contact – well, the theory of how to do it!” says Tony Ingham. “Doing away with the traditional slip rings would be a big advantage in many potential applications, and we kept thinking of more and more reasons to develop the concept.”

Sensor Technology had been founded in the 1970s to develop various instruments and by the 1990s had diversified into several parallel fields of research and development. They had a number of projects running relating to electromagnetic corruption, EMC, and its control.

“Computers and electronics were getting everywhere in the 1990s, but they could be susceptible to electrical interference if they were used in proximity to virtually any sort of machine. This included the obvious places like factory floors, but also hospital wards, offices, broadcast studios, shops full of refrigerators and police command centres. EMC was a big hurdle that had to be overcome if computers were to reach their full potential. We were working hard in the field, as were many other organisations.”

Sensor Technology had been investigating the use of Surface Acoustic Waves (SAWs) or Rayleigh Waves as a way of blocking interference. These waves are produced by most objects in motion and the theory was that they could be made to interact with the EMC waves and cancel them out.  It’s a technique that several teams were working on and with which some success has been achieved.

“We were setting up a long running trial on a lab bench,” recalls Tony. “Things had got a bit messy and we were just tidying up a bit before starting the trial, when we noticed on our instruments that SAWs react to strain.

“It was hardly a eureka moment, but over the next few days the idea grew that the SAWs could be refined to act as gauges. Even this didn’t get us too excited, but then it struck us that it was a wireless connection and this opened up many practical possibilities.”

A few weeks and several late nights on and Sensor Technology had a workable proposition. Soon they had DTi (Department of Trade & Industry) and PERA (Production Engineering Research Association) backing to run a proof of concept project. This was successful and the race was on to develop a marketable product.

“We protected ourselves with patents and worked out a plan to commercialise the technology. We needed a spread of application projects to work on; some easy, some tough; some commercial, some academic; some mainstream, some specialist. Fortunately, just about every machine in the world uses a rotating shaft to transmit power so there were plenty of contenders.”

Universities were fertile grounds. At University College Dublin the technology – by now dubbed TorqSense – was used to mix solids into liquids. It does sound that demanding, but there were highly defined targets relating to achieving an even mix in minimum time and with minimum power expenditure.

“I could see that there were hundreds of industrial applications for this work,” says Tony, “but I didn’t predict what it actually turned out to be – stirring meat and other ingredients into curry sauce on an industrial scale! This may sound a bit trivial, but it represents many many industrial processes, particularly in Ireland’s food-focussed economy.”

The University of Greenwich provided a project at the toughest end of the scale – monitoring the torque in high speed rotating stone saws. These need to be brought up to speed very quickly; when they first contact the stone the shock load is incredible, but to get a smooth cut surface a constant torque has to be maintained throughout the entire cutting process, with on-the-fly adjustments being made to account for variations in the stone’s density.

Industrial stone cutting is a harsh environment and the TorqSense has to perform faultlessly for hour after hour. The technology proved itself again and again in fields as diverse as aerospace, marine, nuclear, pharmaceuticals, packaging, pumping, conveying and mixing. Soon Sensor Technology shifted its focus to developing variations of the basic theme.

“We designed big and small units; single-piece sensors that are simple to fit; two-part units with a small head that will fit into the tiniest space and communicate to a controller elsewhere on the machine; a pulley replacement unit for direct installation on belt and chain drives, etc , etc, etc.”

Another technology transfer is now underway. Sensor Technology is developing a load sensor, which it is building into helicopter cargo hooks. A wireless connection feeds real time data through to the pilot, and also logs it for later management analysis.

“The wireless-ness is a massive advantage, because it means the hook is legally not a part of the aircraft. Therefore users don’t need to spend time and money getting Aviation Authority approval for its installation. The datalogging means exact billing to customers, while an integral GPS means spraying or similar tasks can be done with utter precision.

“The commercial flying community is very excited about the idea and coming up with more and more avenues for us to explore.”
“This all seems a long way from the drive shafts and industrial plant we usually deal with,” says Tony. “But it’s a not-unusual technology transfer scenario. We come up with an idea, get something working and let people see it. Chances are someone will step out of left field and say: “That’s just what I’ve been looking for.”

Automation
With no physical connection between shaft and sensor
Read more

Electronics & Electricity, Sensor Technology, Test & Measurement
A series of actions to support the crisis by expediting production of its healthcare
Read more

Sensor Technology
Food processing presents numerous safety challenges that can be overcome by designing not only intrinsically but also ''extrinsically’’ safe machines, able to give the system an overall safety rating
Read more