Measuring ranges from a few centimeters to 10 m 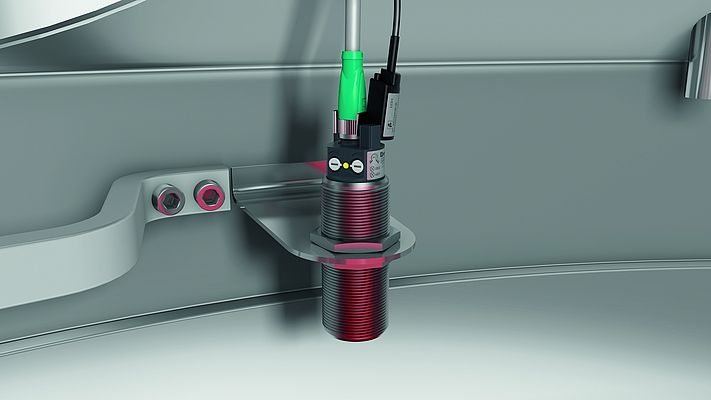 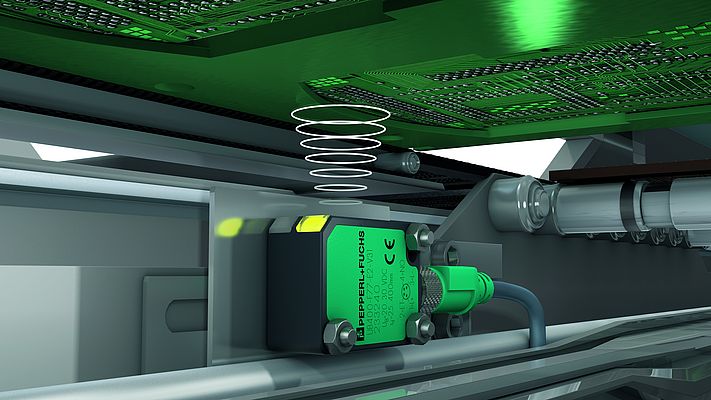 The robust yet accurate measuring method makes ultrasonic sensors ideal for a wide variety of applications. Ultrasonic sensors are characterized by measuring ranges extending from a few centimeters to 10 m combined with extensive parameterization options if the application requires it, turning them from problem solvers into sensors for every occasion.

Ultrasonic sensors such as parking sensors for cars are already well known. In factory automation, they are an often underestimated technology for non-contact object detection. Ultrasonic sensors have an undeniable advantage. Regardless of color and surface, objects can be detected with millimeter precision. Dirt and dust do not have a negative effect on the measured result. The high-frequency vibrations of the ultrasonic sensor's surface simply shake off liquids and dust deposits.

These advantages can be simply explained by the measuring method:
An ultrasonic transducer, which is essentially a combination of piezo ceramics for generating the mechanical vibration and a matching acoustic layer, achieves the required resonance frequency in transmitter mode by applying a burst packet or a single pulse. The sensor then switches to receiver mode, where the transducer operates as a microphone. The receiver signal with a magnitude of a few millivolts is amplified and the propagation time of the echo is converted into a distance by the microcontroller (as with radar technology).
Depending on the system configuration, the ultrasonic transducer may not detect an echo during the transmission of the ultrasonic burst. The sensor is 'deaf' during this time. Objects cannot be detected at this distance, which is known as the blind zone. The blind zone has been minimized by optimizing the amplifier technology and the construction and geometry of the transducer.

Parameterization made easy
Cylindrical sensors with a diameter of 30 mm are typically used for greater detection ranges. Typical applications include level monitoring in containers, height control, also in external applications as well as distance measurement for controlling a production sequence. Extensive parameterization options are required under certain circumstances in order to optimally adapt the sensor for difficult tasks. Two operating philosophies for setting the switching distance have emerged: potentiometers and teach-in buttons. Two different families of type M30 sensors were introduced in response to this trend.

The switching distance of sensors from the UC...30GM70 series from Pepperl + Fuchs can be adjusted easily and intuitively via the potentiometer, even in the absence of an object. Furthermore, a high-speed bidirectional infrared interface can be used for communication with the sensor. The electrical wiring to the sensor is not interrupted and the actual measuring task of the sensor is not disturbed. A small infrared transceiver with USB cable is clipped onto the M12 plug for communication purposes. The plastic around the connector is permeable to infrared light. The current installation situation can be visualized on the connected notebook. Several echoes with distance and reception amplitude, for example, can be displayed to allow optimum alignment of the sensor. In the same way, the sensor can also be parameterized, the projection cone adapted, interfering objects suppressed, switching points with associated hysteresis configured, and analog characteristics adapted, to name but a few parameters as an example. It has been possible to include a real time line recorder in the parameterization software due to the high transfer rates to the infrared interface. The recorder shows the chronological progress of a change in distance, for example, with the option of saving the progress in a data file on the hard disk.

Sensor and controller in one: ultrasonic sensor with IO-Link
With the UC...30GM-IO Series, it is easy to adapt the basic parameters without using external tools. The switching distance can be adjusted, accurate to the millimeter, at the press of a button. In an additional step, the projection cone can be adapted in three stages and the switching output function configured from NC contact to NO contact and vice versa. Using the IO-Link interface, PACTware parameterization software, and device-specific DTM, the sensor can be adapted specifically to the relevant application. As well as having the option of parameterizing the sensor whenever necessary, it can also be integrated extremely conveniently into a controller via IO-Link using IODD. The output data from the sensor, a digital message indicating the position of the detected object and analog distance information are stored directly in the control. If a faulty sensor is replaced, preset parameters can be loaded from the controller to the new sensor, while different parameter sets can be selected when a batch change takes place during production. This method of communication opens up new possibilities for integrating the ultrasonic sensor into machine controllers.

Ultrasonic sensor in miniature housing
Handling machines usually have a very compact design. As a result, there is hardly any space available to install the sensors. The UB...F77 Series is well equipped for these applications. The complete transmitter and receiver electronics, ultrasonic transducer, signal indicators, and connector are packed tightly in a sealed plastic enclosure with dimensions equivalent to approximately two cubes of sugar. By optimizing the converters, it has been possible to reduce the blind zone without decreasing the maximum detection range by the same extent. A 10 mm blind zone where the sensor cannot accurately determine the distance to the object does not pose a problem. In contrast to the line of a laser sensor, the projection cone typical of an ultrasonic sensor represents an advantage in many applications. The extensive sensing spot renders the position of the object or edges irrelevant. Sophisticated algorithms in the sensor firmware combined with selected receiver electronics effectively suppress interfering noises caused by escaping compressed air, for example.

One example is the transportation of PCBs in a mounting machine. The sensor is positioned immediately under the guide rails that support the PCBs. The sensor transmits a digital signal to the controller that indicates the start and end position of the PCB. The sensor ignores small recesses in PCBs but accurately detects the outer contour. Multicolor printing and shiny, silvery tin-plated areas do not usually interfere with the ultrasonic sensor. The switching area can be taught in easily via a pin in the connector without allowing any manipulation.

Needless to say, the features of the sensors include temperature compensation for parameterized sensors, high IP protection, and an operating temperature range required for industrial applications as well as protection against electromagnetic interference.

Ethernet-APL in the Field for High-availability Safety Applications

A New Dimension of Digitalization

Sensor Technology
Pepperl+Fuchs presents WILSEN.sonic.level, its first LoRaWAN and autonomous IoT sensor that gives mobile containers the necessary intelligence to tell operators when and where they need to be collected
Read more

Sensor Technology
F199 from Pepperl+Fuchs provides an accuracy up to ±0.15° and a shock resistance of 100g, and it can operate from -45 up to +85 °C
Read more
View all supplier's articles

Optimum Performance to Meet Any Requirement

Photoelectric Sensors on the Way to Perfection