The application of e-F@ctory at Mitsubishi Electric's Kani manufacturing facility, part of its Nagoya Works, Japan, has led to a number of hugely beneficial outcomes 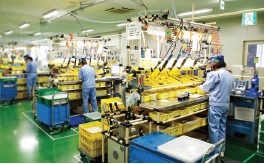 The application of e-F@ctory at Mitsubishi Electric’s Kani manufacturing facility, part of its Nagoya Works, Japan, has led to a number of hugely beneficial outcomes. For instance, by redesigning the process and reintegrating a human element where there was once 100% automation, a single line that previously occupied 280sqm has been reduced to a cell of just 44.1sqm. This 84% reduction in space means that the productivity of each square metre of production hall had been increased through greater utilisation. Mitsubishi Electric’s Kani factory, which produces motor starters and contactors, was facing a number of significant challenges, not least the sheer number of product variations and possible configurations in its product range – some 14,000 in fact. Demand from customers for greater choice had served to dilute the volumes of each particular product, despite overall product quantities increasing substantially.

Automation not always the answer

In the past, manual production at the Kani factory had given way to totally automated assembly lines, which were ideal for mass production with few product variations where high yields could be realised at high speed. However, one problem lay with the fact that many individual components were required to be in stock and ready for the manufacturing process – without which the lines would not be able to run for any appreciable length of time. For various reasons, substantial numbers of assembly lines had been optimised to produce a limited range of products, and these would stand still when components ran out. In such a scenario it became difficult and uneconomical to produce small batches.

The solution was to employ engineering know-how built up over many years and combine this with a vision of integrated manufacturing – known as the Mitsubishi Electric e-F@ctory concept. In tandem, existing technology and third-party relationships were utilised through the e-F@ctory Alliance, CLPA and other collaborative engineering groups. Put simply, the objective was to perfect the ‘art of manufacturing’ or, as it is known in Japan, ‘monozukuri’.
So, where to start? The major challenge was to find the root cause of any inconsistencies. This task involved several approaches, from analysing existing data or collecting new data sets for fresh eyes to review, to looking for links between data that on the surface could appear unlinked. This factor is related to the first principles of IIoT or Industry 4.0. Studying existing processes, as well as the methodology, revealed that natural, normal, organic growth in the production process had inadvertently led to inefficiencies.

By redesigning the process and reintegrating the human element, a single line, which comprised two 35m-long segments occupying some 280sqm, has been reduced to a cell of just 44.1sqm. This 84% reduction in space means that the productivity of each square metre of production hall has been increased through greater utilisation. Even though a single new cell cannot produce the same volume and speed of units as the original fully automated line, it is now possible to deploy up to 6.3 cells in the same space. In turn, total productivity density is much higher thanks to three key factors: a wider variety of products can be manufactured in smaller batches; one stoppage does not halt the whole of production; and the total number of production lines has increased. The end result, much to the satisfaction of the Mitsubishi Electric team at the Kani factory, is effective optimisation of both machine and human resources, as well as the production process and space – a true productivity gain.