From Sensors to Control and Documentation 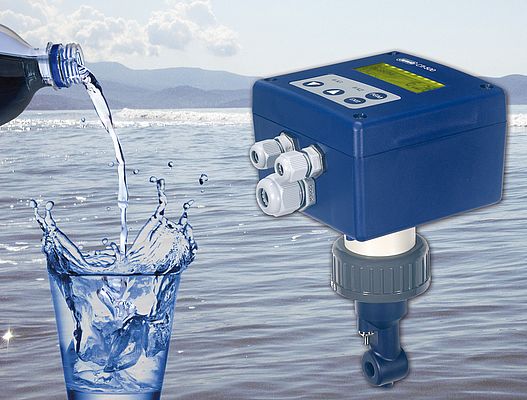 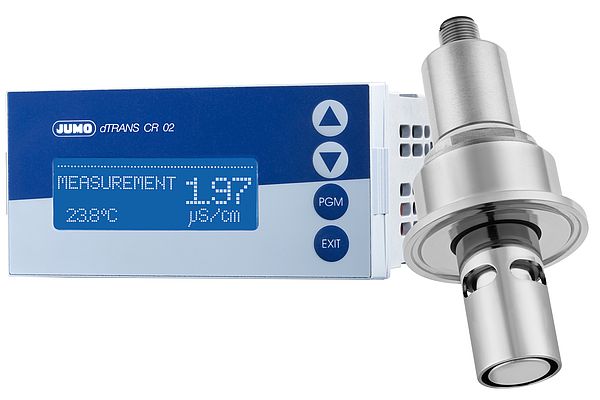 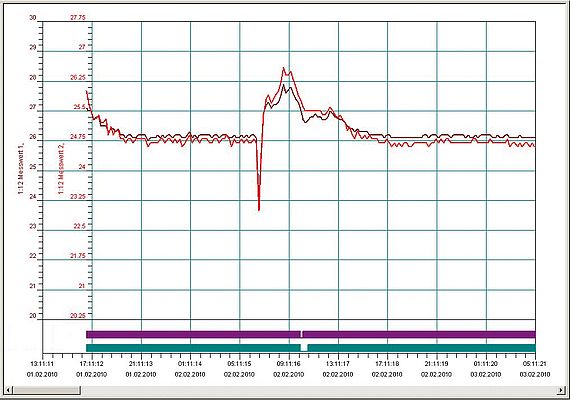 Although more than 70% of our planet is covered with water, only 2.5% of it is fresh water that is fit for drinking. Because the availability of drinking water is limited, purified seawater is an important source of drinking water. Jumo provides customized sensors, as well as measurement and recording technology for this purpose, from a single source.

Drinking water or process water can be obtained from seawater by reducing its salinity. This process is called seawater desalination. It is based on the principle of reverse osmosis, a principle that is really easy to implement. This method of producing drinking water is becoming increasingly important.

The crucial element in a seawater desalination plant is the reverse-osmosis unit. Here, the seawater is pushed through a semipermeable membrane under high pressure (60 - 80 bar), with only certain ions and molecules able to pass through. The process must be checked regularly, to ensure water quality. Conductivity monitoring is the safest and most reliable method of monitoring a desalination plant, to be certain of obtaining water of drinking water quality.

The Jumo CTI-500 is operated either by a membrane keypad and a plain text graphics display (the operating language can be selected), or by a user-friendly PC set-up program. Its backlit display makes the instrument intuitive and straightforward to use. Because the housing cover rotates, it is always possible to read the display, whether it is mounted on pipes that run vertically, or horizontally.

Reverse osmosis reduces the concentration of the dissolved matter by 95 - 98%. After this stage in the process, it is possible to switch to conductive conductivity measurement, as the outgoing water has low salinity. This method allows low conductivity values (0.055 µS/cm to max. 200 mS/cm) to be measured. Here JUMO provides new, and particularly robust, conductive two-electrode conductivity cells, the Jumo tecLine CR (K = 0.1). Because the active measurement electrodes have been shortened, these measuring cells can also be installed in smaller pipe diameters and lower sample volumes. Only physiologically safe materials are used in their manufacture.

Conductivity transmitter/controller with extras
Seawater desalination plants also use transmitters and control instruments, in addition to the Jumo tecLine CR conductivity cells. The new Jumo dTRANS CR 02 transmitter/controller is particularly suitable for conductivity measurement after reverse osmosis. The Jumo dTRANS CR 02 is a compact, modular instrument, with mounting dimensions of only 96 mm x 48 mm x 90 mm (W x H x D). The measurement values are delightfully easy to read on the high-contrast, backlit, graphical LCD display as digital values, as a bar graph and as a graphical trend curve. The Jumo dTRANS CR 02 also has plain text operation. Displaying the parameters in plain text simplifies configuration and helps the operator to program the instrument correctly.

As well as all the classical options that a liquid analysis controller and transmitter should provide, some useful new special functions have been implemented, which are unique for such a compact device: flow-rate measurement, a data logger function and a math module.

In addition to conductivity, the instrument can record flow-rate quantities in parallel via standard signal or binary inputs (a pulse counter for paddle wheel sensors, for example). This flow-rate measurement can be used as a disturbance variable for a control system. The flow-rate quantities can also be selected as a display value, with a daily and cumulative value. Alarm or switching functions can be triggered by the measured values.

The data logger allows processes to be recorded and documented, and helps their analysis considerably. Up to 43,500 data sets can be saved (ring memory), which corresponds to a storage time of approx. 10 hours to 150 days, depending on the resolution. The data can be read out by the set-up program, and then processed by one of the "Office" products.

With the Jumo dTRANS CR 02 math module, the user can mathematically and freely combine and evaluate the measurement signals (addition, subtraction, multiplication, division, square root, logarithm, exponential function, etc.). This allows the efficiency of the reverse osmosis process to be assessed, for example.

Summary
According to the German Safe Drinking Water Act, the conductivity value of drinking water must not exceed 2500 µS/cm. It is essential to continuously monitor this value to achieve safe desalination. As the conductivity values before and after the reverse osmosis process stage differ greatly, both inductive and conductive methods of measurement are used. Jumo provides the complete product portfolio, from sensors to control and monitoring.