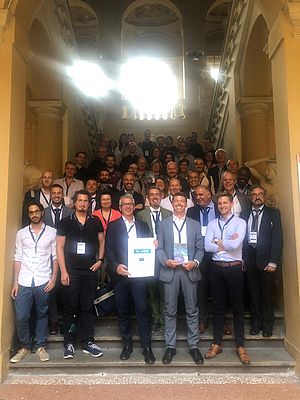 Bonfiglioli has been appointed the coordinator of IoTwins, a European project funded under Horizon 2020, the European Framework Programme for Research and Innovation, to bring Big Data, Artificial Intelligence and Internet of Things into manufacturing and infrastructure.

With the scientific coordination of the University of Bologna and the computing infrastructure of the National Institute of Physics and Cineca, the project will be based in the Emilia-Romagna Data Valley and supported by the Region itself through Art-Er, in partnership with international leading companies such as Siemens and institutions such as the Supercomputing Centre in Barcelona and the Fraunhofer Institute in Munich.

Towards the sustainable digitalization of industrial processes

On their application on Bonfiglioli’s products for the exploitation of wind energy, the Group’s Chairwoman Sofia Bonfiglioli remarked how digitalization should be at the service of people and their environment. “Choosing this area of application is as much a token of digital innovation as it is a contribution to a more sustainable environment,” she said.