Provides flexible cable lengths up to 15m for automation, machine building and robotics 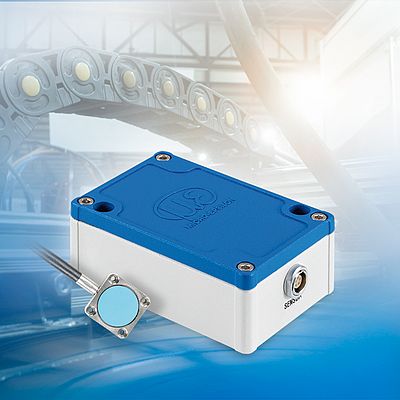 The capaNCDT 61x4 active capacitive system for displacement, distance and position measurements has been launched by Micro-Epsilon with a preamplifier within the sensor head. This is made to directly boost the signal and offers end users greater flexibility for cable routing and movement. It is particularly suitable in industrial automation, robotics, semiconductor production and machine building applications.

Due to the integrated preamplifier, the cable length can be doubled compared to conventional capacitive sensors

The measurement system consists of a sensor with integrated preamplifier, a robust cable, and a compact controller. The integrated preamplifier helps double the cable length in comparison with conventional capacitive sensors. The signal transmission remains stable with this sensor over a length of up to 15 meters. Glenn Wedgbrow, Business Development Manager at Micro-Epsilon explained: “Previously, flexing and bending the cable of a capacitive sensor could cause noise on the signal due to the low-level signals used. Now with the integrated preamplifier directly in the sensor head, changes in the capacitance of the cable due to movement or flexing have hardly any effect on the measurement signal. This offers clear advantages in terms of freedom of movement, extended lengths and enables cable routing with drag chains and on robot arms.”

Two sensors of flat design are available with extended measurement ranges of up to 4mm. The system is immediately ready for use without any on-site calibration required. The measuring system is available with cable lengths of 5m or 15m. The active flat sensor is designed with stainless steel housing and a ceramic sensor element. The cable is integrated on the sensor side, which significantly reduces the required installation space, whilst increasing the mechanical stability of the sensor. To achieve optimum signal quality, the system is factory-calibrated to the desired cable length.

Sensor Technology, Test & Measurement
After a year-long build, the level and pressure specialist have opened their own purpose-built training and seminar center, as well as their UK head office at ‘Metior House’, Maresfield, Sussex.
Read more