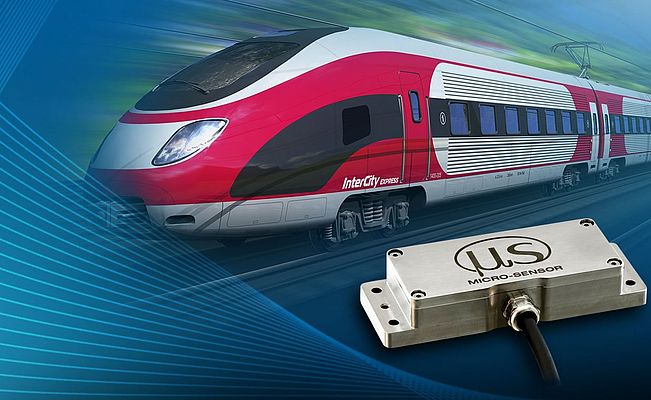 Micro-Sensor recently supplied curve detection systems for use on high speed trains on the Haramain High Speed Rail Project in Saudi Arabia. These high speed electric passenger trains travel at speeds of up to 300km/h across a 453km network between Medina and Mecca.

For high speed trains that travel at speeds in excess of 160km/h, European rail industry regulations stipulate that these trains must be fitted with suitable derailment safety protection systems. High vibrations resulting from the interactions between the train and the track can potentially cause a carriage to derail.

For the Haramain High Speed Rail Project, Micro-Sensor supplied bogie-mounted vibration sensors for improved derailment protection and curve detection systems to monitor carriage/wagon tilt in curves for better control of lubrication of the wheels during curves in the track.

Vibration sensors for bogies often need to be customised to suit different train types. The environment on a bogie is also harsh, with risk of damage to the sensors if they are not adequately protected from dirt, dust, rainwater and flying debris (e.g. stones and gravel) underneath the train. In order to survive in this type of environment, Micro-Sensor vibration sensors are housed in stainless steel or high thickness aluminium and certified to IP68 and EN50155.

In addition to vibration sensors fitted onto the bogies, each train is fitted with two curve detectors - one on the front carriage of the train and one on the very end of the rear carriage. The front sensor detects when the train moves into a curve; the rear sensor detects when the train moves out of the curve. The wheel lubrication system is activated on and off by these two sensors, providing lubricant to the wheels precisely when (and in the volume) it is needed.

Unlike other curve detection devices used on trains, which measure centrifugal forces, the Micro-Sensor curve detector operates using a gyroscope. This innovative technology is not influenced by inclination of the track in the curves. Made from silicon, the gyroscope measures the angular velocity of the train on a continuous basis. The curve detector provides a current and voltage output to the train's central electronic control system or onboard telemetry system. This reduces wear of the wheels and lubricant costs. In addition, the sensor can be used for collecting data for predictive maintenance of the wheels, which increases maintenance intervals and train availability. Furthermore, the measurement system can be retrofitted to existing trains.

Micro-Sensor provides a range of high performance acceleration, inclination (tilt angle), shock/vibration sensors and other industry-specific MEMS-based (Micro Electro Mechanical Systems) sensors. MEMS, the technology of very small devices, typically comprise of components between 1 to 100 micrometres in size. MEMS usually consist of a central unit that processes data (the microprocessor) and several components that interact with the surroundings such as micro-sensors.

All Micro-Sensor products can be custom-engineered with a variety of connections, output signals and mounting options, in low-to-medium volumes to suit specific OEM or R&D applications. Sensors supplied to the rail industry are characterised by their low failure probability, maximum operating life, high functional safety and are designed to meet the highest requirements in terms of system stability.