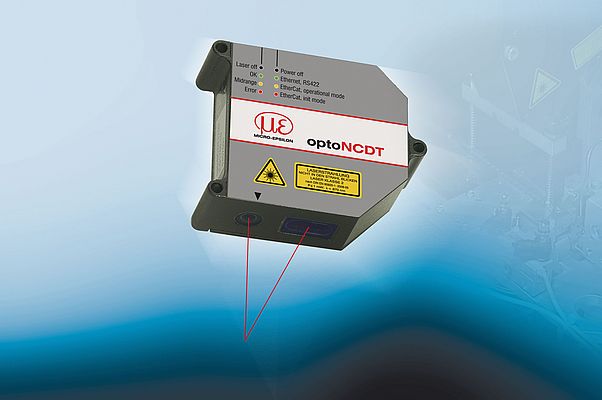 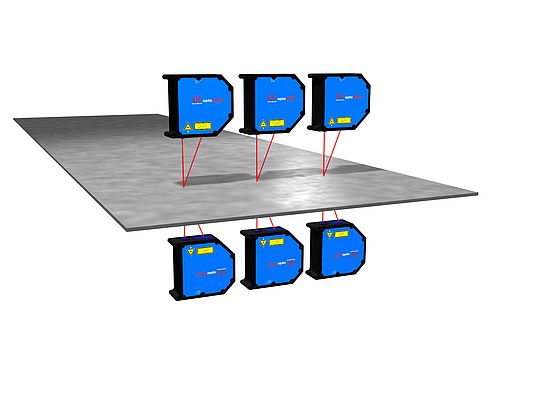 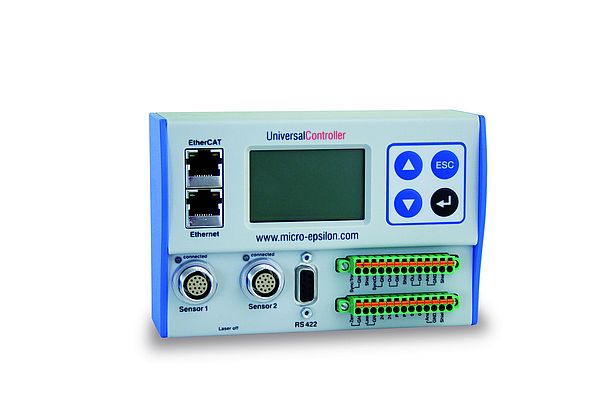 In industrial automation technology, there is a growing trend towards replacing existing first generation fieldbuses with industrial Ethernet. As a result, Micro-Epsilon is integrating new, real time Ethernet technology into many of its laser displacement sensors and controllers. Unlike conventional bus systems that require lots of installation effort, industrial Ethernet is faster and easier to integrate, which explains why this technology has gained widespread acceptance in many industrial manufacturing environments.

Due to its larger bandwidth and real time communication capabilities, sensors and controllers that are connected via Ethernet enable extremely high speed data transfer, simplified read-out and analysis of process and measurement data, as well as location-independent configuration of the sensors. Unlike conventional analogue output signals that suffer from inherent 'noise' on the output circuit due to grounding, electrical resistance from connectors and cable quality, measurement data sent via digital networks does not degrade even long sensor cable lengths. Any increase in 'noise' on a circuit effectively reduces the measurement resolution and results in reduced accuracy of measurements.

In addition, manufacturing processes are becoming higher speed and more automated and so these industrial networks require sensors and measurement systems that support these faster, dynamic processes. As a manufacturer of precision sensors, Micro-Epsilon is at the forefront of developing sensors and controllers that cater for these future industrial requirements.

In recent years, EtherCAT has established itself within the market as a communications standard (protocol) that can offer true real time capabilities in automation technology. In line with this, Micro-Epsilon has developed sensors and controllers with EtherCAT capability, enabling them to be smoothly integrated into existing control and automation networks.

EtherCAT explained
EtherCAT is a fully Ethernet-compatible and truly 'open' standard. EtherCAT technology overcomes the system limitations of other Ethernet solutions. The Ethernet data 'packet' is no longer received, then interpreted and copied as process data at every connection. Instead, the Ethernet frame is processed 'on the fly'. The newly developed FMMU (fieldbus memory management unit) in each slave node reads the data addressed to it, while the telegram is forwarded to the next device or sensor. Similarly, input data is inserted while the telegram passes through. This means the telegrams are only delayed by a few nanoseconds.

On the master side, very inexpensive, commercially available standard network interface cards (NIC) or any onboard Ethernet controller can act as the hardware interface. The common feature of these interfaces is data transfer to the PC via DMA (direct memory access). In other words, no CPU capacity is taken up for network access.

EtherCAT offers new heights in terms of network performance. Due to the FMMU in the slave nodes and DMA access to the network card in the master, the complete protocol processing takes place within hardware and so is independent of the run-time of protocol stacks, CPU performance or software implementation.

In industrial automation environments, accurate synchronisation is critical. This is particularly important if coordinated movements are necessary or where multi-channel displacement measurements need to take place. The most powerful approach for this is the accurate alignment of distributed clocks. In contrast to fully synchronous communication, where synchronisation quality suffers immediately in the event of a communication fault, distributed aligned clocks have a high degree of tolerance from possible fault-related delays within the communications system.

With EtherCAT, data exchange is completely hardware-based on 'mother' and 'daughter' clocks. Each clock can simply and accurately determine the other clocks' run-time offset because the communication utilises a logical and full-duplex Ethernet physical ring structure. The distributed clocks are adjusted based on this value, which means that a very precise network-wide timebase with a jitter of significantly less than 1 microsecond is possible.

However, high resolution distributed clocks are not only used for synchronisation, but can also provide accurate information about the local timing of data acquisition. For example, controls frequently calculate speed from sequentially measured positions. Particularly with very short sampling times, even a small temporal jitter in the displacement measurement leads to large step changes in velocity. With EtherCAT, new expanded data types are introduced. The local time is linked to the measured value with a resolution of up to 10ns, which is made possible by the large bandwidth offered by Ethernet. The accuracy of a velocity calculation then no longer depends on the jitter of the communication system. It is orders of magnitude better than that of measuring techniques based on jitter-free communication.

EtherCAT Controllers
For many years, Micro-Epsilon has provided customers with displacement sensors that offer synchronous master-slave capability. However, EtherCAT now provides customers with genuine real time measurement performance, particularly in support of high speed processes and automated production technologies.
All new laser and optical sensors and controllers developed by Micro-Epsilon have EtherCAT protocol integration as standard, allowing integration with EtherCAT/Ethernet networks. For example, Micro-Epsilon recently launched a powerful, flexible programmable universal controller, the CSP2008, which enables the real time processing (up to 100kHz) of up to six input and output signals from the company's displacement sensors. The controller is ideal for thickness, height, roundness, flatness or coplanarity measurements, where signals from multiple displacement sensors need to be synchronised and processed in real time. The controller is able to process up to six digital or analogue input signals: two internal (via the front panel), plus four external signals via plug-in EtherCAT modules. EtherCAT can also be used as an external interface for connecting further sensors and I/O modules.

The controller's unique, simple to use, intuitive interface enables the user to configure the unit via a PC or laptop using the Ethernet interface. All user-selectable functions on the controller and measured values can be viewed, displayed and stored in real time via the PC's own web browser, without having to install any third party software. Alternatively, simple configuration can be carried out using ASCII commands via the RS422 interface.

EtherCAT laser displacement sensors
Laser displacement sensors are also being equipped with Ethernet interfaces, allowing connectivity with EtherCAT networks. Micro-Epsilon's optoNCDT 2300, for example, is a market-leading, self-contained laser displacement sensor, which requires no separate controller and which provides an extremely high measuring speed of up to 50 kHz and resolution of 0.0015% FSO (Full Scale Output). The sensor is therefore ideal for high-speed dynamic applications such as vibration measurement and profile scanning of uneven, rapidly changing surfaces.

The sensor uses Micro-Epsilon's new A-RTSC (Advanced Real Time Surface Compensation) technology, which enables the sensor to automatically compensate in real time for difficult-to-measure surfaces. A-RTSC is a further development of Micro-Epsilon's patented RTSC feature, which, when combined with high-speed software algorithms, dramatically reduces signal noise at high measurement speeds. When users need to measure against a shiny surface, for example, they ideally require a sensor that is able to automatically adjust the laser pulse duration (or laser on time) of the sensor to give them the optimum exposure time on the CCD for that particular surface. This, in turn, provides a higher accuracy measurement due to lower noise level on the output signal.

Resolution is down to 0.1µm and linearity is down to ± 0.4µm. Data output is via Ethernet, RS422 or EtherCAT. The sensor can also be configured remotely using a web browser interface. This direct connection means the user can store parameters for a particular application, which can then be uploaded to one or multiple sensors, reducing set up time considerably.