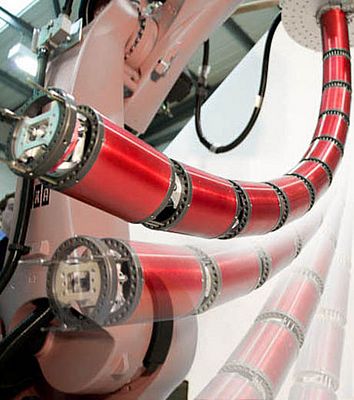 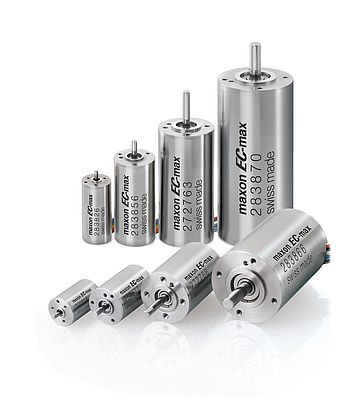 Inspection and maintenance problems often occur in confined and hazardous spaces, and whilst these spaces are difficult for humans to work in, a snake-arm robot has no issue. Brushless DC motors enable the high-precision movements of the multiple degree-of-freedom robotic snake-arm.

Just like in a science fiction film, the robotic snake-arm wriggles through a small hole. Its task: to perform a safety inspection in a hard-to-reach location, recording video as it does so. Very confined and hazardous spaces are common in many industrial sectors. Small spaces are not only difficult for humans to access, but these areas and the devices they contain also have to be inspected frequently. OC Robotics, based in Bristol (UK), looked at the world of animals for inspiration and developed the “snake-arm robot”. Managing director Rob Buckingham and technical director Andrew Graham developed the first prototypes in 2001. They have continued to this day to perfect the technology behind the snake-arm robot. The company was founded in 1997 and manufactures snake-like robots that are especially suitable for confined spaces and hazardous environments. The snake-arm robots have a slim, flexible design - they can easily fit through small gaps and circumnavigate obstacles with great skill.

Snake-arm robots have been used in aerospace assembly, in the nuclear energy sector, in medical technology and in security applications. Depending on the customer's requirements, the snake-arm robot is available in different lengths and diameters. The standard sizes vary from 40 to 150mm in diameter and have a length of 1 to 3.25m; if required, lengths of up to 10 m are possible, or diameters down to 12.5mm. The diameter of the snake-arm determines its functionality - the larger the diameter, the more weight the robot can lift.

Each snake-arm is customized specifically for the respective application. Furthermore, the “head” of the snake-arm robot can be equipped with various tools. OC Robotics offers tools for visual inspection with appropriate lighting and cameras, special gripper jaws or lasers for cutting metal and concrete (see video). Depending on the application, the snake-arm robot can be mounted on a stationary or mobile station such as an industrial robot or a gantry.

Always following its nose
The snake-arm is capable of performing a whole range of inspection and maintenance tasks, without any direct support from its environment. It can be navigated freely across open spaces. The robot is controlled by means of proprietary software which enables the operator to control the snake-arm by means of the “nose-following” principle. A command is transmitted to the tip of the snake-arm by means of a joypad and the rest of the joints follow this specified path. In other words, if the operator steers the tip clear of an obstacle, the rest of the snake-arm will follow suit. With this technology, it becomes a lot easier for people to work in hazardous environments, yet humans are not eliminated completely, explains Rob Buckingham, managing director of OC Robotics.

Brushless maxon DC motors for flexible movements
In a human arm, the tendons connect the muscles to the bones of the joints. Similarly, in the snake-arm robot, stainless-steel wires are connected to the individual joints of the robot like tendons. Each individual wire inside the snake-arm is connected to a maxon motor. The snake-like wriggling movements are the result of the motors transmitting the mechanical power to the snake arm, where the individual joints of the arm are located. Depending on the version,  up to 50 maxon motors are installed in each snake-arm. These are not located directly in the arm, but instead in an actuator pack in the base of the robot. This is advantageous as the electronics are more easily accessible and not exposed to the confined and hazardous environments. Another area of use for the motors is the different tools for the snake-arm's head. Here, one or two maxon motors are responsible for the movements of (for example) the gripper jaws or swage tool.

The biggest challenge to the drives is that they have to provide a high enough power output inside a compact design. Therefore, the brushless maxon EC-max 30 DC motor (60 W) and the ceramic version of the GP32 planetary gearhead are used for this highly complex application. Thanks to the brushless design, the electronically commutated DC motors are excellently prepared for long operating times. The heart of the maxon motors is the ironless winding – with the benefits inherent to the physical design, such as zero cogging torque, high efficiency and excellent control dynamics.

Special modifications were necessary for the motors used in the snake-arm robot. A special cable and fastening holes were required, whilst the maxon motor planetary gearhead was modified for the application and a special housing was developed for the brake. For OC Robotics, the reliable motors, good customer support, high quality and high power density were the decisive criteria for choosing maxon motor.