Stairs are still unsurmountable obstacles for many robots. Yet a young team at ETH Zurich is building a vehicle designed to negotiate steps with ease - by hopping. Author: Adrian Venetz, maxon motor ag 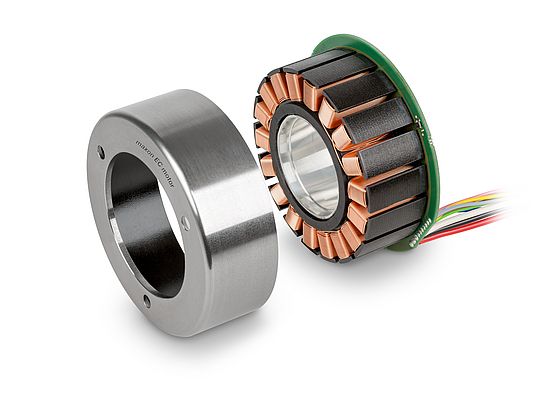 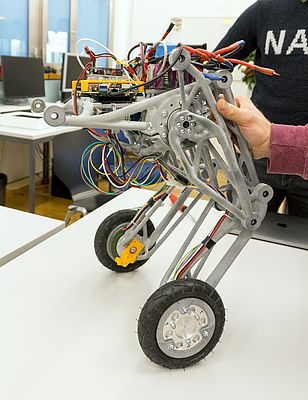 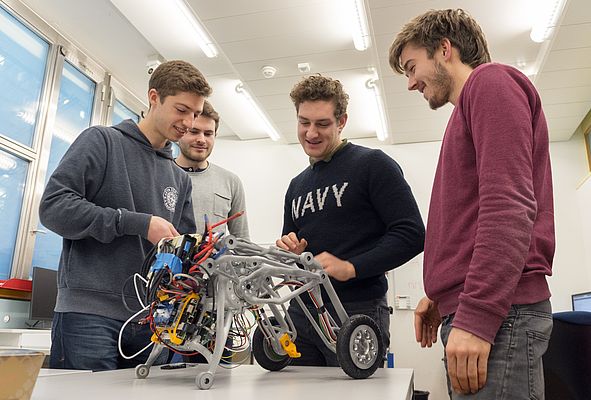 “Ascento” is the name given to the sophisticated device by its creators, a team of eight students majoring in mechanical engineering and one in electrical engineering. The robot is quite special: It moves and balances on two wheels. From an engineering standpoint, this is significantly more difficult than building a device on four wheels. However, a bipedal robot provides much better mobility and adaptability to different terrain types.

That's not all: The main goal of the nine up-and-coming engineers is to make the robot leap. They want it to be able to jump high, like a kangaroo, and land again safely on its two wheels. “This would enable the robot to master stairs and other obstacles,” student Florian Weber explains. The Ascento team originated from a focus project. In this type of project, undergraduate students of various disciplines have a chance to apply their knowledge to a concrete project - from the initial idea to a functioning prototype.

Special feature of the Ascento

The special feature of the Ascento is that it is designed as an inverted pendulum: The center of gravity is above the axis. As a result, the Ascento is able to stand and move only as long as it is powered and actively maintaining balance on its wheels – similar to a standing human, who continuously has to expend energy to maintain balance. This makes the Ascento comparable to a Segway, which is also driven by two wheels that are on the same axis and requires a controlled drive to maintain balance.

Potential applications for the Ascento are for example building inspections. For example, the vehicle could enter a house that's on fire or in danger of collapse. A built-in camera would deliver valuable information to rescuers outside the building. There are already various robots for these purposes. However: “Especially when it comes to climbing stairs, many robots reach the limit of their ability,” says Marcus Vierneisel, who is also a member of the nine-person focus group.

The goal for the Ascento is to enable it to climb stairs at a human's walking speed. Due to its lightweight two-wheeled design, the Ascento is more agile than other robots anyway. “On the other hand, larger robots are able to interact with their environment. This is something that Ascento cannot do,” adds mechanical engineering student Lionel Gulich. Equipped with sensors, the Ascento would be able to scout a building and deliver 3D scans of the rooms in a short time. Of course, the prototype won't be able to scout a whole building by itself yet. However, it will be able to approach a flight of stairs on remote control and then use its sensors to measure and calculate the height and length of the jumps required to climb each step. “Triggering each jump via remote would be too complicated and slow,” Florian Weber says. This puts the Ascento in the category of semi-autonomous robots.

It is still uncertain whether the focus project and the Ascento prototype will eventually become an inspection robot ready for commercial production. However, this is not the primary goal. Focus projects serve mainly to let ETH students try their hand at an actual project instead of just cramming theory.

The students are receiving technical and financial support from the drive specialist manufacturer maxon motor, as part of the company's Young Engineers Program (YEP). The Ascento's drives include two maxon EC 90 flat motors. Technically, the torque of 963 mNm delivered by these motors is somewhat overdimensioned when the robot is moving along a single plane. The drives come into their own when balancing the Ascento after landing on a narrow step, as this requires high torque and precise control. The ETH students decided to use the frameless version of the motors. Rotor and stator are delivered separately and without an output shaft. The rotor and stator are connected only during the integration into a system. Especially in robotics, maxon frameless motors are often the first choice because they enable space-saving and elegant integration into joint structures. Each motor is driven by an EPOS4 module.