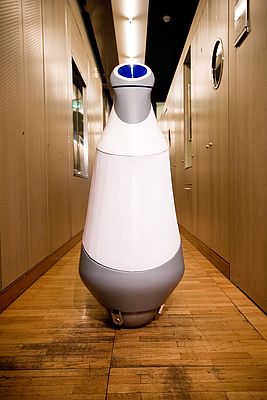 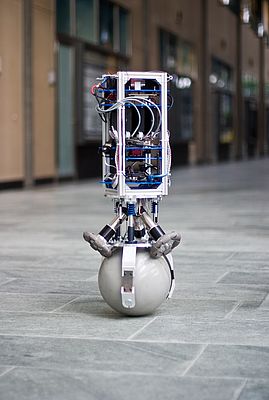 Rezero “in the Nude” 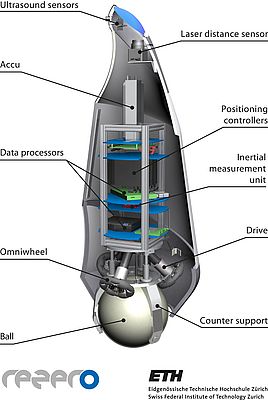 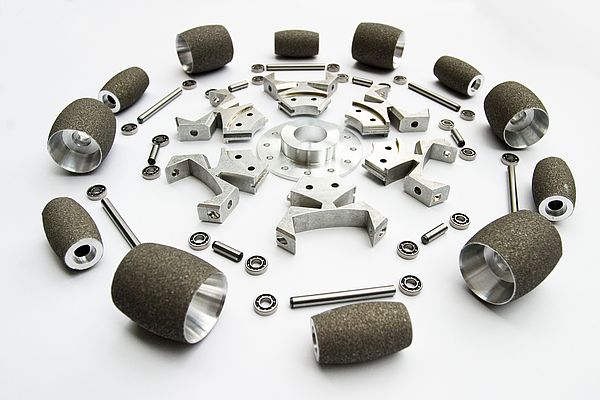 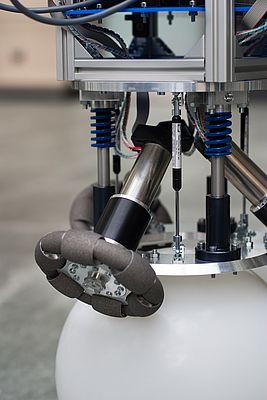 As a focus project of the Swiss Federal Institute of Technology Zurich (ETHZ), students of its Autonomous System Lab (ASL) along with their fellow colleagues at the Zurich University of Applied Sciences (ZHAW) and the Zurich University of the Arts (ZHdK) have formed a cooperation of a special kind. Their Ballbot “Rezero” accomplishes not only the balancing act on the ball, but also convinces with technical solutions, unprecedented agility and appealing design.

The Ballbot Principle
From a Ballbot’s perspective, moving on a ball is both, a blessing and a curse. Curse due to its general instability and the resulting high risk to keel over. Blessing since this also allows free movement in any direction and the rotation around its own axis. To commence movement, a Ballbot leans out of its center line, to further accelerate, it lets itself fall even more in direction of travel. For deceleration however, additional acceleration is required to first “out-compete” its center of gravity before coming to a synchronized upright standstill. Yet; total “standstill is the Ballbot’s death“. Even when appearing standing erect, it equilibrates by continuously revolving the ball underneath its center of gravity.

Likewise, rotating the ball is another obstacle to overcome: A “normal“ wheel radially rotates around its own axis, either forward or backward. Yet, movement in the wheel’s axial direction can only be achieved by overcoming friction. Applied to the drive of a ball it means that, when moving in one direction, at least one of the drive wheels will radially jam. This requires a multi-directional drive system – so called omniwheels permit load transmission in one direction, while simultaneously providing free-wheeling in the other direction.

The Rezero Solution
The ball distinctly differentiates from other approaches. It is based on a geometrically highly accurate aluminum hollow sphere covered by a 4 mm thick rubberized, low-wear surface. Both, precise spherical shape and high coefficient of static friction result in supremely quite running, extreme dynamic, and high velocity of up to 3.5 m/s (almost 13 km/h). Most other Ballbots travel somewhat “out of the true” and seem to stand out rather by their sluggishness and slowness.
Rezero’s omniwheels have a fully encapsulated outer shape and are arranged in 120° angles around the ball’s circumference. Low-loss design and load transmission-optimized surface contribute to the exceptionally high-grade construction design.

The drive system impresses by remarkable dynamics, high velocities and, at the same time, high-precision positioning and quite running. It composes maxon EC-4pole 30, planetary gearhead GP 42 C and angular encoder HEDL 5540. The drives are designed to ideally position the ball underneath the three omniwheels to provide optimum traction. They are regulated by maxon EPOS 70/10 positioning controllers in current control mode addressed as CAN slaves.

A real time low-level computer manages fast, accurate equilibration and position monitoring while the high-level processor in Linux is running the Robot Operating System (ROS) and takes care of interaction with the surroundings. Rezero can be controlled by joystick or trajectory planning via MATLAB. In “game mode”, a group of people can take control by jostling and tapping the robot within preset parameters, such as maximum speed, acceleration, range of movement.
The 160 Hz Inertial Measurement Unit (IMU) measures translative and rotatory accelerations, as well as spatial tilt angles and direction. Data are being smoothened via internal Kalman filter and transmitted to the low-level computer.
Various laser and ultrasonic detectors as well as surround microphones allow full 360° detection of objects within a range of approximately 6.5 m. Depending on the selected mode, objects are assessed as obstacles, or can be incorporated in the robot’s behavior.

Kids (and not just small ones!) can hardly resist the temptation to touch the robot, to play with it or to bring it to heel. And this not just due to its incredibly organic movements, but also because of its very friendly, inviting appearance. The kinetic behavior reflects also in its exterior packaging; curved, nicely shaped, of strong character, dynamic and elegant.

The Result
Rezero it the first Ballbot that not only perfectly commands the act of balance, but also outbids the moving capabilities of a Ballbot in an incomparable manner. The project team’s interdisciplinary total package solution is a real eye catcher and impresses with superb mechatronic elements and high grade design. Thus, it does not come as a surprise that Rezero has attracted the attention of renowned companies in the film and entertainment industry.