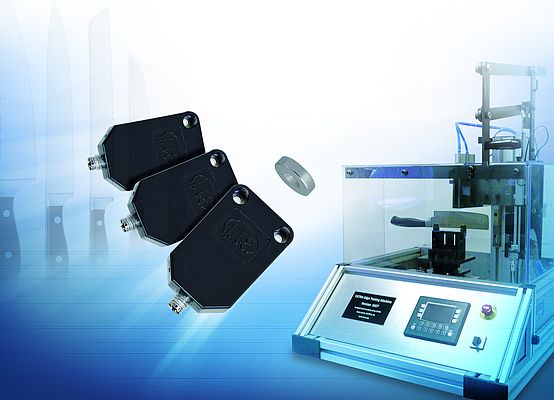 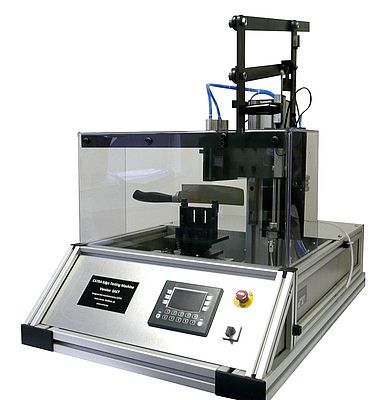 Manufacturers of knives inspect blade sharpness by using several testing methods for quality control. CATRA in Sheffield/UK specializes in testing machines that determine blade cut depth. These machines are based on magneto-inductive sensors from Micro-Epsilon.

From the very early days, a knife has been one of the most important tools for humans. Even in the Stone Age, sharp blades were used. In the beginning, these were made from stone, wood, bones and other materials. Also bronze, iron and steel were used later. Since the 18th century, the knife has become part of the cutlery set and can be found in almost all cultures. It is used for works or in spare time activities, as cutlery, in the household or for shaving. There is one common requirement - the knife must be sharp and durable while cutting various materials with ease.

Therefore, knives and blades must be sharp which is tested using corresponding machines. The Cutlery and Allied Trades Research Association, CATRA, manufactures the only cutting test machine on the market that fully conforms to the International Cutting Test Standard (BS EN ISO 8442-5.2005). The CATRA TESTER is an automatic and semi-automatic knife sharpness and life testing machine that measures the sharpness and edge life (durability) of a wide range of blades and knives. Here, CATRA relies on Micro-Epsilon’s unique magneto-inductive sensors which measure the distance from a magnet. The mainSENSOR not only measures the distance but also determines the speed of each blade stroke. The knife is mounted in a position with the blade vertical and the sharp side up. When the knife is in the right position, a stack of synthetic paper is lowered onto it. By oscillating the blade back and forth, the blade cuts into the paper, the depth of the cut being the measurement of sharpness. The test media is loaded with 5% silica, which has a mild wearing effect on the blade edge. By repeating the back and forth motion, further cuts are made, which increasingly wear the cutting edge. The measurement of cut depth at each subsequent stroke can then be plotted to produce a wear curve for each blade tested. A magnet of the magneto-inductive sensor is fixed on the movable slider that moves the knife back and forth. The sensor is 50mm away. The voltage level now indicates the displacement which the knife moves per stroke. Via the displacement over time, the stroke speed is measured (max. stroke 40mm). The cutting speed is 50mm/s and a typical test time is 15 minutes for 60 cutting strokes.

It’s a simple set up that is reliable, cost effective, and long life. Its robustness makes the mainSENSOR ideal for this measurement task. This means that customers not only benefit from having an extremely compact design, but the sensors also provide an attractive price-performance ratio for OEM applications.

The mainSENSOR operates on a patented measuring principle developed by Micro-Epsilon, which combines the advantages of both inductive and magnetic sensors. A magnet is fixed to the measurement object. The movement of the magnet induces a change in the magnetic flow in the sensor element, which is detected by the sensor coil. A linear relationship between output signal and magnet distance (self-linearization technology) is produced due to counteracting physical effects. As different strength magnets are applied, measuring ranges of up to 55mm can be achieved. However, for changing the measuring range, it is only necessary to change the magnet. The mainSENSOR is maintenance and wear-free. As well as for displacement and distance measurements, these sensors are also used in special applications such as rotational speed measurement of e.g. shafts and large gear wheels.

Unlike conventional measuring procedures, the magneto-inductive sensor also measures through non-ferromagnetic materials such as aluminum and steel. A clear benefit is provided here as the sensor and the magnet can be installed separately in applications with closed systems or housings. It is therefore possible to mount the magnet safely in harsh environments and the sensor in protected areas.