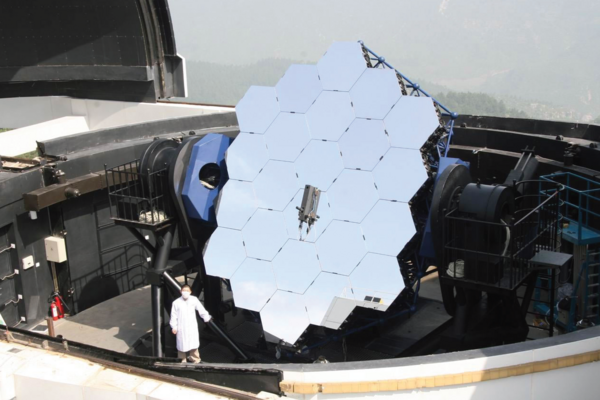 LAMOST is located in the Chinese observatory at Yinglong Station near Peking. The telescope is a new type of segmented reflector telescope for the spectroscopic surveying of space. The project is part of the ESO (European Southern Observatory), a European organisation that builds and operates a suite of the world’s most advanced ground-based astronomical telescopes.

The custom-developed eddy current sensors have a measuring range of 2mm and provide extremely high resolution of just 1nm (nanometre). The sensors also offer long-term stability of better than 20n mover 3-4 hours (a typical operating cycle for the telescope). The function of the sensors is to compensate for any slight movementof the lenses used by the telescope.

The sensors are critical to the successful operation of the telescope. The telescope comprises a series of lens and numerous hexagonal-shaped mirrors. A primary mirror receives light from space and directs it to a correction mirror, which is in the focus of the primary mirror. The corrector, in turn, bundles the light information onto an optical element (in this case a fibre optic cable).

The diameter of the primary mirror is approximately 4m. The primary mirror and corrector comprise 46 or 24 individual mirror segments, which can be moved and adjusted to receive different angles of between -10 and +90 degrees. Due to the high optical resolution of the telescope, the mirrors have to be precisely aligned with each other at all times, as well as consistently flat and uniform. The smallest movement of these mirrors due to thermal expansion means the telescope will lose focus.

The telescope is used primarily at night to scan the sky. Before it can be used, regular calibrations of the telescope are required, which take between 3 and 4 hours to complete. For these calibrations, the sensors have to be extremely stable, as the slight-est drift of the sensor can result in changes in output.

Originally, LAMOST utilised capacitive displacement sensors from another supplier. However, these sensors functioned poorly because they were sensitive to contamination (dirt and dust) and humidity (condensation), as the sensors are exposed to the elements when the telescope is in operation.

The sensor lenses are made from ZERODUR, a zero expansion glass ceramic material that offers a very high thermal stability of 0.05ppm/degrees K. ZERODUR is an inorganic, non-porous glass ceramic that has a completely non-directional, isotropic structure. Due to the perfect balance of glass and crystal phases within the material, the thermal expansion coefficient is almost zero.

As Jones concludes: “Despite the high proportion of custom developments required for this application, we were able to complete the new developments in just nine months from initial contact with the customer.”