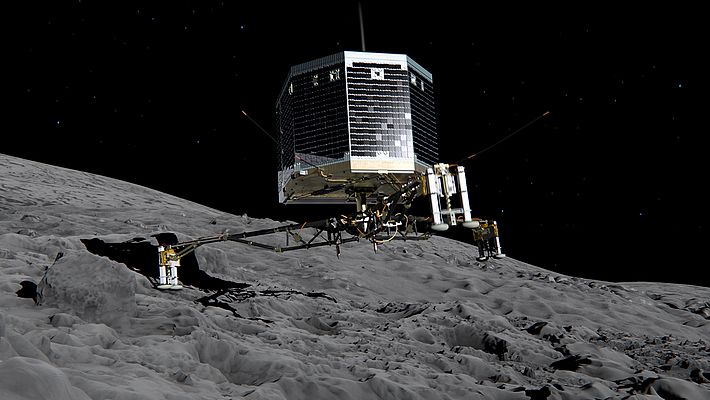 Touchdown of the Philae lander

The moment of truth has come, after a 10-year journey that has clocked up more than 6 billion kilometres, the European Space Agency's Rosetta spacecraft has deployed the Philae lander to the surface of Comet 67P/ Churyumov-Gerasimenko on Wednesday November 12th.

Rosetta probe was launched by Ariane 5 spacecraft on 2nd March, 2004, from Europe's Spaceport in Kourou, French Guiana on an 10-year journey to the Comet 67P/Churyumov-Gerasimenko. It was designed to enter orbit around the Comet's nucleus after a series of gravity assist manoeuvres to gain enough orbital energy, with three swing-bys at Earth and one at Mars.
En route to the Comet, the star rover flew by the asteroids Steins (September 2008) and 21 Lutetia (July 2010). Rosetta spacecraft carries eleven science instruments to probe the Comet's nucleus and map its surface in fine details.

It also landed a package of instruments (the Philae Lander) to study some of the most primitive, unprocessed material in the Solar System. The mission will provide clues to the physical and chemical processes at work during the formation of planets, beginning 4.6 billion years ago.
Among the instruments on board is the OSIRIS, the Optical, Spectroscopic and Infrared Remote Imaging System. OSIRIS is the eye and the imaging recorder of the Comet chaser throughout its long journey to the 67P Comet. It combines a Wide Angle Camera (WAC) and a Narrow Angle Camera (NAC) and is intended to capture high-resolution images of both the flight and the Comet's nucleus. Lika's cooperation with CISAS (Interdepartmental Centre for Studies and Space Activities) of the University of Padova has resulted in the development of an ultra-reliable and high-performance encoder for controlling the movement of the shutter motors in both WAC and NAC thermostated telescopes.
Thanks to this, Lika Electronic has been recognized as the first company in Italy and the second in Europe to manufacture an encoder intended for space applications.

The I38 SPACE incremental encoder is integrated into brushless motors mounted on the shutter mechanism of both the WAC and NAC cameras. This very compact (Ø38 mm, 36 mm depth, 55 g weight) and very low power consumption (200 mW max.) optical encoder has a resolution of 14400 counts and an accuracy better than ±10° el.
It is designed to control the sophisticated movement of the shutter and is capable of monitoring exposure times shorter than 10 msec. and ensuring a lifespan longer than 500,000 cycles at least.
Sure enough, malfunctions are not acceptable throughout the very long mission (over 12 years). Furthermore, it is expected to operate at extreme conditions of low temperatures and outer space vacuum.
Because of the wide temperature fluctuations and radiations, selected components have been fitted without using any glue. Besides technical success, also costs were a key factor: as CISAS states "Lika's encoders proved to be about 5 times more cost effective than similar high-tech space encoders from specialist competitors".

Encoders for the Wind Industry

Encoder with Ethernet and Fieldbus Interface