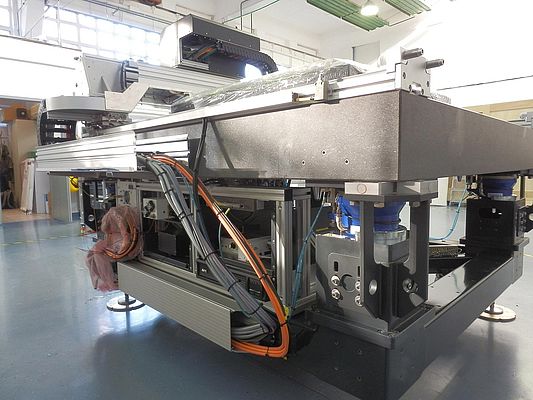 A glass measuring machine at Semilab is equipped with an ACE air spring system from the ACEolator series with the help of BIBUS Hungary in Budapest. 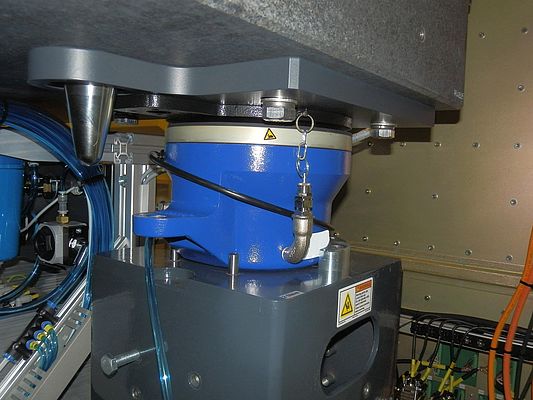 The PAL type low-frequency air spring elements with automatic level control serve to isolate the machine from vibrations and/or decouple it from ambient vibrations. 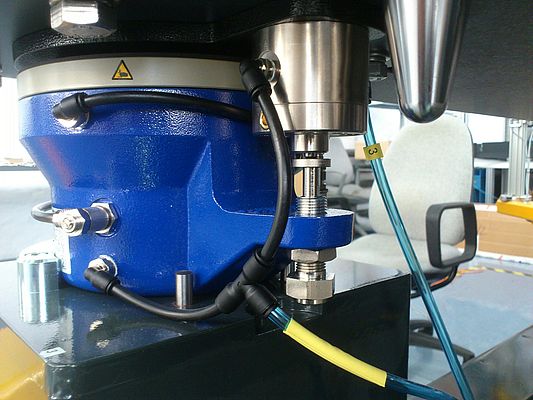 The PAL air springs ensure optimal vibration isolation thanks to their low natural frequencies which can range as low as 1.5 Hz in standard systems, depending on the design, and even as low as 0.5 Hz in custom systems.

A complete system of PAL type low-frequency air spring elements is normally made up of three or more isolators, three of which are equipped with a level control valve. Three valves are required to ensure static determination (i.e. stable control behaviour

Measuring machines are a tricky business. The smallest inaccuracy will lead to unusable results. Which is why ambient vibrations that could be transmitted to the system must be isolated at all cost. This was a task that turned out to be harder than initially expected in a Hungarian application. The originally used standard insulators were unable to solve the problem, whereas ACEolators could.

As a full-range supplier from design to distribution, the Hungarian company Semilab provides a great variety of measuring techniques. The measuring portfolio ranges from the characterization of semiconductor and photovoltaic materials through to production process monitoring for semiconductor components and solar cells. The complexity of this range of solutions is a measure of how well this Budapest-based enterprise is handling it. Most of these technologies can be integrated in various platforms. Over 70 physicists and 90 engineers around the world ensure an extremely high quality standard. Further reasons for success: most Semilab measuring techniques are non-contact and non-destructive. The installation of a glass measuring table was nonetheless beset by difficulties. The glass measuring machine had originally been equipped with isolators that worked very softly in the horizontal axis. The relatively low lateral rigidity of the products used led to low internal damping of the isolator and permitted the machine to start vibrating when subjected to dynamic shocks or additional accelerations. The measurement errors resulting from these undesirable motions meant that the problem needed to be remedied as quickly as possible. Semilab hence lost no time in beating a path to the door of Norbert Turi at the Hungarian BIBUS branch. And as they had hoped, Norbert Turi, long-standing sales engineer at BIBUS, a leading supplier of hydraulic, pneumatic and mechatronic technologies, quickly came up with an answer. In order to offer Semilab the best solution available at the time, he also took ACE Stoßdämpfer on board, the innovative component supplier and BIBUS cooperation partner. But this was not the end of the trail to a successful solution, because wherever vibration isolation and damping is concerned, this company from Langenfeld in Germany in turn puts its trust in a close cooperation with its sister company Fabreeka GmbH from Büttelborn in the German Hesse region. In this case the ACE expert for vibration technology, Dieter Wohlschlegel, teamed up with his colleague at Fabreeka, Axel Platen.

Precision isolators for precision systems
The trail was hence leading from Hungary to Langenfeld and Büttelborn near Darmstadt and back again by way of several stops. This is quite remarkable in itself because not that long ago, a project involving four partners at three different locations would have led to virtually insurmountable problems, at least if speed is of the essence. But in the digital age, this kind of challenge can be tackled in no time. Given the dynamic additional forces, the required level of isolation, the static and moveable mass and the machine's dimensions, Fabreeka's engineering manager, Axel Platen, suggested low-frequency air spring elements of the PAL 21-6 type. These ultimately installed membrane air springs are commercially available air spring elements. One distinctive feature of this solution is the level control valve, whose special construction ensures above average longevity. Particularly with horizontal motions caused by relatively great acceleration forces as in the case of the Semilab glass measuring table, the robustness and durability of the isolation system is an important argument. This is especially true given the reduced abrasion of its valve tappet, ensuring precise resetting over a long period of time. Once the right elements had been selected, the experts Wohlschlegel and Platen jointly took on the installation of the system in Hungary. It demonstrated that the new air spring system works a lot better than the old one where the dynamic behaviour and isolation properties are concerned. The assessment criteria to be considered always include the natural frequency, i.e. isolation, the resetting precision of the level control valve, and the settling time, which is the time required by the system to regain its original status after an interference or impulse.

Depending on the application, ACE offers various products for noise minimization and vibration isolation from the ACEolator family first introduced at Motek in 2013. And if the interference is not as low-frequency as in Hungary, other solutions from the broad ACEolator range can be applied. Rubber-metal isolators and machine feet, for example, will eliminate vibrations for engines, compressors or fans, amongst others. And damping plates of the SLAB type are for example applicable to machine foundations, in pipeline construction or for machinery requiring post-hoc protection.

Everyone is very happy at Semilab by now, because BIBUS, ACE and Fabreeka have, by way of their fast and efficient help, successfully ensured that the glass measuring tables work to the full satisfaction of the company's own customers. Not least of all thanks to the system analysis and on-site installation by the engineers from ACE and Fabreeka.

Motors & Drives
Following a report highlighting a contraction of over 7% in 2020 in the industrial gearbox market, Interact Analysis released a follow up focusing on light-duty geared motors and solo gearboxes
Read more

Motors & Drives
The motors are ideal for battery-fed applications, where they help maximize the running time per battery charge
Read more

Motors & Drives
More than 100 electric motors from maxon have been used on the Red Planet and have withstood cosmic radiation, dust storms, and temperature fluctuations. With the Perseverance rover, precision drives are once again flying to Mars. The key to success is th
Read more