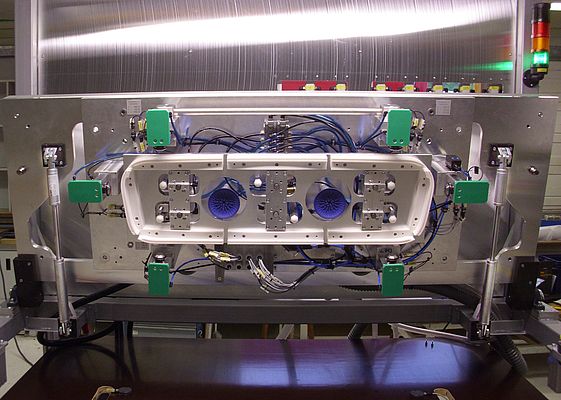 The bonding unit for the assembly of convertible tops: The tailgate is placed in the upper die, which is fastened to a large flap. The assembly is performed by pneumatic cylinders. 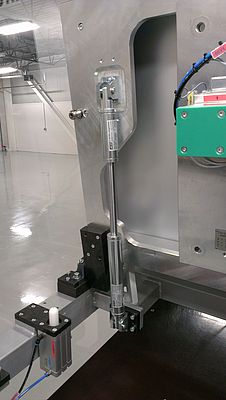 The size of the closing and opening mechanism of the bonding unit is impressive: Users have to move 200 kg. 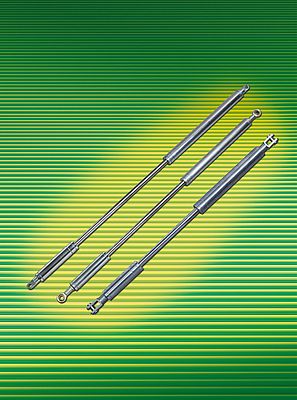 Tandem gas springs are equipped with a piston rod made of hard chromium plated steel and steel galvanized cylinder liners and connection parts. These durable and lean helpers are available with extension forces of 300 N to 5,000 N.

Industrial gas springs give users added strength when opening flaps, hoods and lids. Standard models such as those used for automobile engine hoods and tailgates are limited as a result of their functional principle. Since their introduction in 2011, tandem gas springs can particularly be used to operate heavy elements. A prime example of this is the assembly of convertible tops. This project was also completed in a team effort, involving the companies Jaeckel Modell and Formenbau GmbH und die ACE Stoßdämpfer GmbH.

The limiting factor of conventional gas springs lies in the closing process. At the beginning of the process, a large amount of extension force has to be exerted manually. Therefore: The larger the weight of the flap, the stronger the gas spring, the higher the closing force and the more unmanageable handling becomes. This is because the center of gravity is at the farthest distance from the pivot point when opening a flap from a horizontal position, whereas it is directly on the pivot point when opened in a vertical position. Tandem gas springs elegantly avoid this problem. Quasi wired in series, a stronger gas spring takes on the initial, heavier part of the process and the weaker of the two does the lighter part of the work. When closing, the same thing happens in reverse, leaving just a considerably reduced extension force to be managed. Plus the retraction of the piston rod produces a bent force curve. Besides its full-range industrial gas spring program, ACE Stoßdämpfer GmbH offers these high-performance models with a piston rod made of hard chromium plated steel and steel galvanized cylinder liners and connection parts. These durable and lean helpers are available with extension forces of 300 N to 5,000 N. These are very large force ranges it you take into consideration that these models have been manufactured with a cylinder diameter of just 40 mm. The variations can be attributed to various strokes. A total of seven tandem gas springs have been created by combining various strokes. The following case which depicts the process of assembling convertible tops in Lower Saxony's district of Peine, the cooperating companies Jaeckel Modell and Formenbau GmbH und ACE opted for the model GST-40-50-150-AA.

Mass determines force and model
"We are very pleased that ACE has supported us in the conceptual phase with their design calculation and the proper selection of springs," says Heiko Hattendorf, project manager at the Lower Saxon specialist for the construction of special fixtures, PU and foam tools as well as measurement fixtures. This once again showed how beneficial it is if manufacturer and contractors start to collaborate as early as possible in the process. Initially Jaeckel - due to their lacking knowledge of tandem types - tended to give preference to large, heavy-duty gas springs for their project. The strenuous physical working conditions that this involves during the joining process would have more or less been included in the deal. In line with ACE's principle of saving their partners time, money and in this case blood, sweat and tears, technical advisor Kai Boelingen recommended the models that were launched in 2011: "Reliability and durability is ensured e. g. with a piston rod equipped with a non-wear surface coating as well as an integrated grease chamber that ensures constant lubrication of the seals", he explains. These benefits have been paying off for some time now in the assembly of top materials for convertible tops. In the bonding unit, the frame and top fabric, with applied adhesive beads, are placed in the fixed die. Then the tailgate has to be placed in the upper die, which is mounted to a large flap. Once the flap is closed the pneumatic cylinders predominantly perform the assembly. Whereas this is a mechanical process, closing and opening has to be performed manually. In this specific case, the starting angle of 350° had to be harmonized with an opening angle of 80° and a mass of 200 kg, and that with a handhold radius of 850 mm. If you look at the model number of the tandem gas spring GST-40-50-150-AA, the first number denotes the diameter of the cylinder in millimeters, the other two numbers reflect the strokes of the springs. The tandem partners of this innovative machine element are able to produce extension forces of 900 N and 2,500 N. And it is these combined forces that allow the specialists at Jaeckel Modell und Formenbau GmbH to lift flaps weighing 200 kg with almost playful ease, so that the work conducted during course of the pilot phase was completed successfully. Heiko Hattendorf is satisfied: "We compared products for a long time. The new ACE products are safer and faster for this application and easier to use than large, conventional gas springs. And believe me, we shopped around."

Areas of application can still be expanded
Besides the previously mentioned stroke variety, ACE also provides several different custom solutions. Whether users opt for custom or standard types, all gas springs that ACE offers can be fitted with a wide range of mounting accessories. Plus the customer can choose between regular end damping or no damping. In addition, ACE headquarters in Langenfeld, where industrial gas springs are filled customer specifically, also provides various special force curves, special lengths, strokes, alternative end fittings, wipers. Designed to accommodate a temperature range of -20 °C to 80 °C, industrial gas springs by ACE are also available upon request in stainless steel. In this case, they even comply with the hygiene guidelines of the medical technology and food industry.