In Germany's universities, seminars and lectures can be as busy as in a bee-hive. For highly sensitive measurement systems, the resulting vibrations in some buildings are sufficient to prevent useful test results 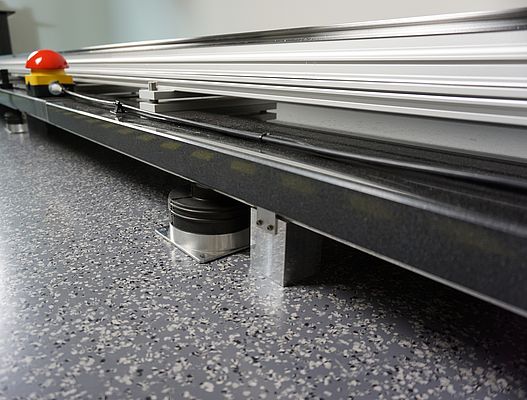 Distance measuring systems using radar are on the rise. Without them, for example, the vision of completely autonomous driving is hardly conceivable. They are already in use today under harsh conditions in steel mills. The reason: Compared to optical distance sensors as used in devices working with a laser beam, they are less susceptible to errors in case of smoke, fog or dust. This also makes radar systems a better choice for road traffic in conditions of poor visibility such as fog or reflecting puddles, also thanks to their ability, unlike the laser, to capture multiple targets simultaneously with a single application. Although the laser will remain a benchmark in terms of measurement accuracy, radar systems are becoming increasingly better in this regard. Thus, their measurement accuracies are already often below 1 µm. This is made possible by the expansion of the bandwidth used, higher system stability and additional optimizations in the signal evaluation. The standard deviation is around 140 nm in one meter distance at high measurement rates of up to 1 kHz.

Some of the driving forces in this research segment are the students of Professor Nils Pohl and Dr.-Ing. Timo Jaeschke, both working at the department for Integrated Systems at Ruhr-University Bochum, Germany. They test the limits of what is possible with various measuring systems. Dr Jaeschke on the starting phase of this case: "In the beginning of the project, we reckoned that there could be disturbing vibrations during the busy everyday life at our faculty. So, I went in search of suitable solutions with which to isolate vibrations." A few clicks on the Internet later he came across ACE: "The homepage makes a good impression, is structured and shows that ACE offers a range of vibration control products," says Dr Jaeschke. Consulting about the case by email, ACE recommended low-frequency pneumatic leveling mounts of the PLM-3-LX2 type which were quickly integrated into the measuring test stand so that the students were able to start working on the measuring system.

The structure of the radar system consists of a linear track with approximately 5 m of travel on granite slabs that have a thickness of 4 cm. "I chose the granite slabs because the material stretches only very little with temperature changes and is less susceptible to vibrations than other materials due to its own weight," explains Dr Jaeschke. In order to make his results comparable and to prove that the radar technology can replace the laser, he also installed a laser

interferometer as a reference system. According to the expert, Dr. Jaeschke, who has published widely in this area, it is anything but a matter of course that the radar will ultimately reach measurement accuracies below 1 µm as well. Therefore, the eight PLM-3s were used not only for safety, but above all to get the most accurate measurement results while decoupling the linear track from the building.

For Lukas Piotrowsky, currently working on his master's thesis and supervised by Dr Jaeschke, the PLM solution contributes to the reduction of disturbing mechanical vibrations. "If you have to rely on a peaceful environment to carry out your academic research, you only realize how loud university life can actually be, especially during the breaks." It quickly became clear that the PLM were not only ideally suited for the conditions imposed by the environment, but also for extremely contrary conditions, such as during the tests that had to be simulated for sensor characterization. "This is because they adapt and are flexible in their use. For example, it is entirely possible for them to perform alternating static and dynamic measurements," Dr Jaeschke points out. This is owing to the feature that the academics can let air out of the PLM mounted under the linear track during dynamic measurements and fill them with the exact right amounts of air again when static measurements are carried out at the institute.

When not performing service on measuring systems and test stands, pneumatic air spring elements are also used under high-speed presses, production equipment and many other constructions. The low natural frequency of 3 Hz makes it possible to use the PLM in areas which were considered to be out of reach for such devices just a few years ago. With eight different models available immediately from stock through ACE, the PLM are capable of carrying both smaller loads of 45 kg up to large constructions of 8,800 kg. That way, devices of all kinds can be easily isolated from unwanted vibrations and at the same time ideally leveled by means of an integrated valve, something that happens in Bochum when changing gears from static to dynamic measurements and which has proven to be a real advantage.

The academic team is planning the 3D positioning of industrial robots to qualify the measuring accuracy and further development of the radar sensors. Supported by ACE’s PLM, the team currently continues their work within the research project Radarmeter-3D. It is part of the lead market competitions of the German federal state of North-Rhine Westphalia, and it is funded by the European Union and the federal state itself with support coming from the European Regional Development Fund (ERDF). More information can be found here: www.insys.rub.de/forschung/aktuelle_projekte/.

By Robert Timmerberg, plus2 GmbH for ACE Stoßdämpfer GmbH