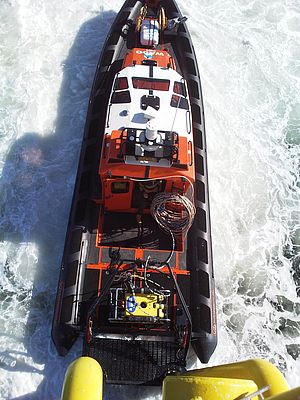 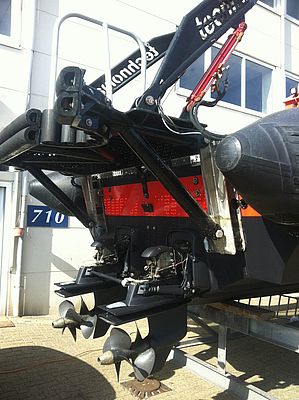 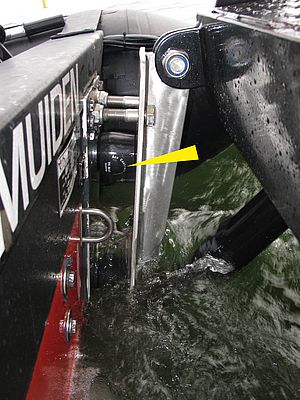 TUBUS profile damper with a one-piece profile body are always supplied with clamping bolts incl. a special shaft for secure and simple assembly 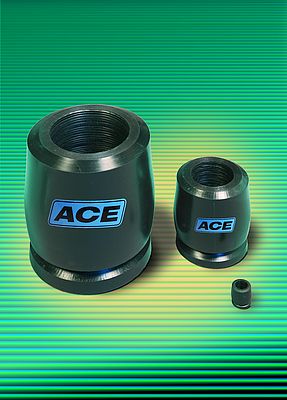 They are small, black and unassuming. No wonder that even designers who do not yet know TUBUS profile dampers enough tend to go for emergency stoppers. Many think it impossible that the machine elements made of co-polyester elastomer can become heavyweights. The safe slowing of maintenance boats in North Sea wind parks proves the opposite.

They are controversial on land, but at sea they are credited with great potential as far as provision of energy is concerned: We are talking about wind turbine installations. Their huge size and the array of many wind turbines can present an almost pretty picture to some onlookers from afar. As they are still imposing seen close up, but not exactly beautiful, it stands to reason that their daily visitors will not be tourists but service technicians.
The experts from the Dutch company Wals diving & marine service arrive in this capacity. They have the responsibility of repairing cables and carrying out maintenance work on the wind turbines. For a long time, landing was a real adventure for Wals teams, who are known as specialists in underwater operations way beyond the Netherlands. In contrast to docking on land, a construction that reminds us of truck work platforms is needed to ensure safe transfer because of the swell of waves and the limited space.
The visual appearance suggests that of a hydraulically manoeuvred basket. In reality, for safety's sake, the construction is a rigid object, which is fixed to the boat. This means that the captain must slow down the whole weight of the maintenance boat, and even 20% more than that, when docking. The additional mass is due to an estimated impact speed of approx. 0.5 m/s and the power of the waves. This is the reason why the company Wals, situated in the port city of IJmuiden in the bay of IJ, had to struggle for a long time with damage to their light, polyester transport ships. Furthermore there was always a potential further risk of injury to employees. A new and easy to integrate solution had to be found. Reconstruction of boats was to be avoided if at all possible for economic reasons.

Partner for damper solutions in the Benelux countries
ACE is a global brand leader in industrial shock absorbers and manufacturers of innovative as well as high quality damping solutions. This reputation is however not enough to simply appear as the primary contact for all eventualities beyond Germany's borders. Even in times of globalisation, the opportunity of telephone conferences or Skype facilities via the Internet, the personal contact is and remains for most people the decisive criterion for permanent partnership. It is in business as it is in private life.
For this reason, ACE Germany has employed two men for many years on site, Han Titulaer and Ralf Küppers, who not only speak Dutch, but whose life also centres around the area, and therefore they are almost forced to have a great affinity to maritime matters. Therefore ACE's Benelux-Team soon realised after a short description of the case, that accurately pinpointing docking was not feasible. This provided the impetus to look for suitable TUBUS profile dampers instead of industrial shock absorbers. This allowed a 70 % cost saving, without compromising safety as it would be the case with rubber shock absorbers or steel springs, as these have the unpleasant tendency to disintegrate quickly or to break.

The dampers, made from co-polyester elastomer, on the other hand are designed to withstand 1 million pressure cycles. With four docking manoeuvres per day these pre-assembled and maintenance free elements can be easily inherited by the next shipping generation. Their seawater resistance and material, which can withstand surrounding temperatures of - 40° C to 90° C, also predestines them for the use in ships owned by the Wals diving & marine service.
Having considered all the benchmark data, such as the aforementioned mass and impact speed, Han Titulaer decided in close consultation with Paul van Tongeren, Wals' own Dutch designer, to install a total of four TUBUS type TS84-43. TS represent the axial soft dampening series of these machine elements, the 84 stands for the diameter and the 43 for the maximum stroke in millimetres. Despite these small dimensions and therefore a weight of just a little more than 400 grams, such an element can withstand 460 Nm per stroke under continual pressure. When the TUBUS - as in most instances of use - is only intended for emergencies - then this value increases to 644 Nm per stroke.

Used in combination, the four machine elements carry out their work so reliably, that no damage was caused on an eight ton vessel after an installation was carried out with the provided clamping bolt. To be ready for more and more important situations, ACE offers a total of six construction series with almost 100 single product units, which apart from the aforementioned linear features can also protect on a diminishing scale as well as progressively and in extreme cases even can absorb pressure of up to 18,000 Nm. In this specific instance, Paul van Tongeren is convinced that he has found the right supplier in the ACE Benelux-Team "everything works perfectly", he reports and is glad that the TUBUS machine elements do not need any maintenance elements, in contrast to boats and the wind parks they head for.