Payload of 40 tonnes must be breaked gently 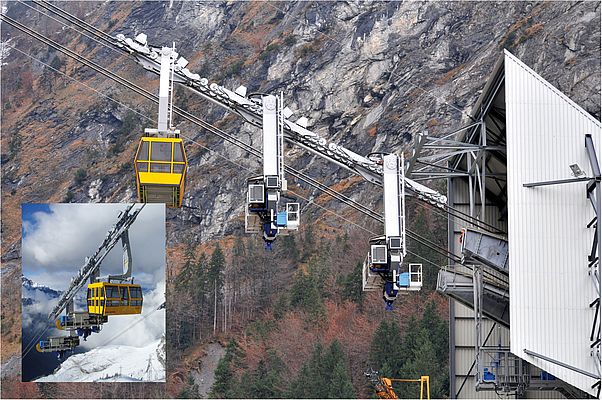 The supply cable cars transport payloads of up to 48,355 kg and meet the 1.30 m "small" ACE and Bibus shock absorbers in the valley station. 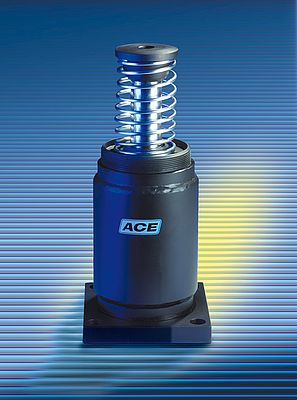 This special shock absorber is designed that it can, should breakdown occur, brake two and a half times the speed of normal running and while doing so reliably protect the end positions of the construction for an approach velocity of up to 1.0 m / s.

The dampened drive-in of two exceptionally large cable railway supply cars into the stations required the designing and installation of special damping solutions. With a payload of 40 tonnes moving cable cars must be fast and reliable but also be braked gently when driving into the valley station. In order to manage this task, it was necessary to develop novel internal shock absorber sleeves and adapt them to fit heavy industrial shock absorbers. Bibus in Switzerland and German ACE Stoßdämpfer solved this case for their customer.

90 mm thick support cables with a weight of almost 50 kg per metre, three phase motors with 1,150 kW rated power, a payload of 40 tons and this times two. All this to ensure the supplying of an underground hydroelectric storage power plant during its enlargement, two supply cable cars were made, which may be named as the largest in the world. In order to ensure that these vehicles slow down safely on entering the station it was necessary to develop new industrial shock absorbers in XXXL size.

A difficult job with superlatives
The location idyllic, the Swiss electric utility company AXPO's project formidable: The Limmernsee dam, a reservoir in the Canton of Glarus that was completed in 1963, and its underground pump storage power plant are to be expanded. Once the work has been completed, the pumps in the power plant will be able to achieve an output of 1,000 MW. This value corresponds approximately to the output of a middle-class nuclear power plant, mind you not in terms of energy production but when considering the turbine or pump performance. At the same time, the Mutsee basin being about 2,500 meters above sea level is the highest reservoir in Europe and one of the longest dams in Europe will also be built there by 2015. The goal is to produce convenient base load by pumping water from the Limmernsee into nearby Lake Mutt. The electricity produced will be sold when peak power is required. Many thousands of tonnes of heavy building materials, machinery and vehicles needed for the construction of the dam must be transported across the mountain landscape; it will take three years to complete. Both cable cars needed to be built according to the dimensions described because a special drill head for drilling tunnels weighs 30 tonnes alone and although the surrounding is idyllic, it is very difficult to access. On this scale accessories also require special engineering services. As for previous cable car and gondola projects, the Doppelmayr Garaventa Group, manufacturer of the giant cable car, turned to Bibus AG, a leading Swiss manufacturer of hydraulic and pneumatic drive and control systems and equipment. The contract was to deliver heavy industrial shock absorbers, which make gentle braking of the cable cars possible when they enter the valley station. It was clearly evident that only a hydraulic shock absorber solution would be able to meet these requirements. These bulky machine parts are not produced by the company itself but procured from its cooperation partner - ACE Stoßdämpfer. Therefore, the Bibus product manager responsible turned to Mr. Dominik Beeri his contact in Langenfeld, Germany.

Swiss man shouts and sets off a test avalanche
It became clear after a few phone calls and e-mails to those responsible at Bibus and ACE that only very heavy industrial shock absorbers would work for the case in question. ACE offers a wide range of adjustable and self-adjusting shock absorbers for this purpose. Types designated CA4x16 are self-adjusting and can brake up to 115,000 kg and when doing so accommodate up to 126,500 Nm per stroke. However, when the first damping characteristic curves were calculated, it turned out that the development of a new inner sleeve would be needed for the heavy industrial shock absorbers due to local requirements concerning supporting force and damping characteristics. This shows two work procedure characteristics used by ACE and Bibus: Firstly, the end customer is always involved early and intensively in the planning process of new projects so that optimum results are obtained and secondly, if requested, the damping specialists can deliver more performance by providing special models as mentioned here. Braking the 48,355 kg heavy total mass and the energy absorption of 99,000 Nm per stroke would be a difficult to accomplish task even for the normal CA shock absorber series but when does a shock absorber normally have to stop such a cable car of this size? For comparison: The supply railway in Switzerland is equivalent to a passenger train that could accommodate approximately 500 people. In this case, the incredibly high energy-uptake is derived not only from the weight of the braking mass but also from the fact that the special CA4x16-S-2955 industrial shock absorbers finally used must fulfil two distinct functions. As well as normal cable car braking during its normal operation, it is also responsible for a safe stop in case of an emergency and if the situation arises, must also be able to dissipate more kinetic energy than in "normal" circumstances because if failure occurs the approach velocity is 1.0 m/s, which is two and a half times that of normal operation.

The dimensions of the special design are indeed identical to those of the standard production series but have a different interior and appear tiny in contrast to the huge cable cars. The CA shock absorber measures 1,300 mm in the extended state, 406 mm of which are intended for the working stroke. Its previously mentioned performance data show that engineers from Bibus and ACE are in principle already prepared for designing further record cable cars. Meanwhile, in the Swiss canton of Glarus the work described above is being carried out and the heavy industrial shock absorbers are reliably doing their job this season of converting large amounts of kinetic energy.