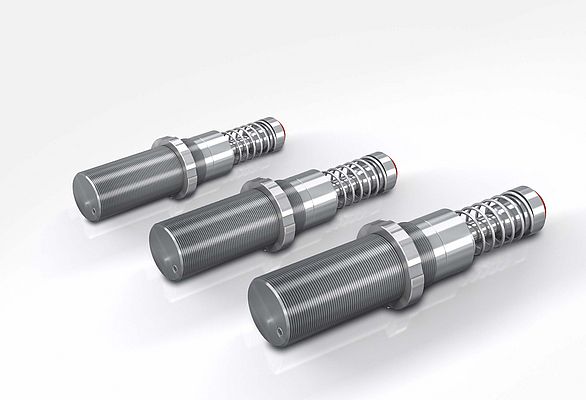 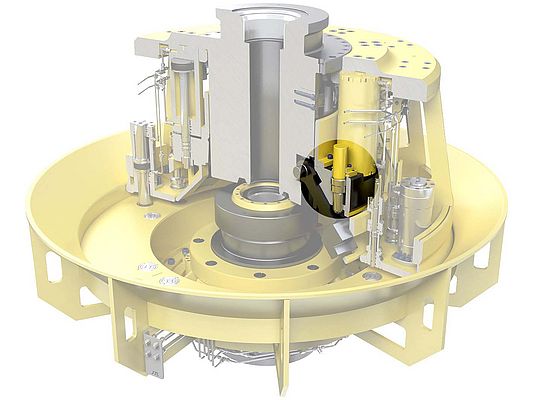 Oil rigs should extract plenty of energy yet be the cause of little. So a pipeline - as ductile as possible - serves to the well opening as a flexible, reliably separable connection in an emergency. However, this connection to the oil source on the seabed is an Achilles' heel. If the connection ruptures or cannot be separated quickly enough when danger is imminent such as in a thunderstorm, unpredictable and often serious consequences inevitably result. With the XR Connector, Subsea Technologies Ltd has raised considerably levels of safety at this neuralgic place. In its innovative design, the company puts its faith in 10 MAGNUM industrial shock absorbers from ACE in Langenfeld in every connector.

18 months is the time it took from the blueprint of an initial concept to delivery of the first XR Connector by the Aberdeen, Scotland, based company operating on the global stage. And it presumably would have been a great deal longer if the members of the development team had not had from the outset answers in the back of their minds to detailed issues, such as damping solutions planned in. The special solution has a name: ACE. Subsea Technologies Ltd (STL) already has good experience with the shock absorbers from the Rhineland-based company - in the development as part of a subsea soft land system. The efficiency in absorbing kinetic energy was so impressive back then that STL immediately turned to ACE Controls International for the new challenge. This has turned out to be a decision which has borne considerable fruit, both during the 18-month development phase and in the operational phase since. But first to how the Xtreme Release (XR) Connector works: In contrast to previous solutions, this connection between the borehole and the pipeline is not based upon a classic male-female plug connector but an opposing system with a face-to-face seal technology. And this is also its stand-out feature. This is because hardly any limits are set on the maximum angle of incline when the oil pipe is uncoupled. In contrast, previous connections only allowed comparatively low angles for oil rig teams, and so only short associated time windows in which safe separation is still possible. This is a scenario which is difficult to control in heavy thunderstorms, and when collisions or other damage occurs. If, in an emergency, the riser leading away from the well opening cannot be removed quickly, the risk of damage to the oil rig can be so serious in extreme cases that major injury or even death can result. And the amount of other anticipated damage to the riser, well opening or pipeline quickly escalates into the millions of Euros, not to mention the negative effects of an uncontrolled escape of oil on the environment.

MAGNUM stainless steel dampers master massive challenge
Many designers consider the MAGNUM family from ACE the reference class for industrial shock absorbers. Thanks to the sturdy shock absorber body, an innovative sealing technique and strengthened guide bearings, these adjustable or self-adjusting dampers are synonymous with long service lives even under the most adverse of conditions. This means MAGNUM models are the solution of choice for deployment underwater, even if conditions on the water and above it are stormy. Integral with the face-to-face seal technology mentioned above are clamping dogs and, in a controlled or emergency release, significant kinetic energy can be imparted into the dogs. Within the innovative, patented design of STL, ACE's MAGNUM subsea shock absorbers were designed into the assembly to safely absorb this kinetic energy and thus ensure that no damage occurs to the dogs or other equipment during the release.

Self-adjusting ACE dampers have the task of gently absorbing this energy such that no damage can occur to the XR Connectors or other equipment either in front or behind. The fact than an innovative MAGNUM can withstand up to 1,700 N per stroke, and an effective mass up to 21,200 kg, for a stroke of just 50 mm, and that a total of 10 of these dampers are fitted for every XR Connector, shows the immense forces at play on the seabed. This is easier to explain considering the combination of heavy swell and oil rig at the other end of the connection. This also applies for the use of seawater-resistant variants of the innovative damping elements which are made of rustproof stainless steel. It is surprising however than the MAGNUMs can perform their heavy work with a response time of just 0.12 seconds. The activation and taking effect of the dampers, each weighing 2.9 kg, is therefore more than adequate for any emergency anticipated on the open seas.

In standard variants, MAGNUM damping solutions from ACE are approved for advance speeds of 0.15 to 5 m/s, and temperature range -12°C to 70°C. In special cases however, these ranges can be exceeded by some considerable amount - because in addition to off-the-shelf dampers, ACE offers industrial shock absorbers tailored precisely to the respective application for extreme temperature ranges. The same applies to exceeding of energy in emergencies. This can be up to 40% higher than normal. In tests off the north coast of Scotland, the values were specified beforehand in a collaborative manner such that it is possible to state, not just on the basis of a number of connecting parts and suitable accessories, and previous projects between ACE and STL, that this link is intact.

Electronics & Electricity
With the beginning of 2021, the company operated changes in key positions in Germany, Austria and Italy
Read more

Electronics & Electricity
Hamilton Medical and Schurter are linked by a longstanding partnership. In addition to the complete control units for their modular Hamilton G5 ventilator, Schurter also supplies components for devices such as the Microlab STAR series.
Read more