Optimizing damping for a special-purpose machine 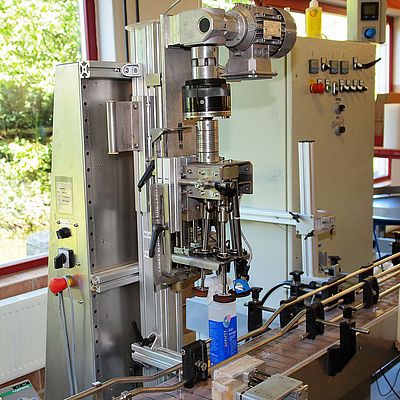 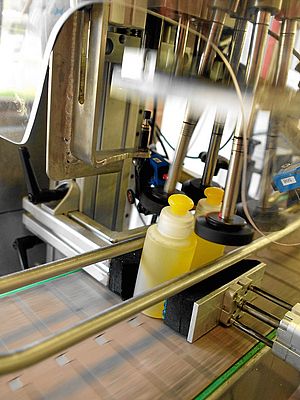 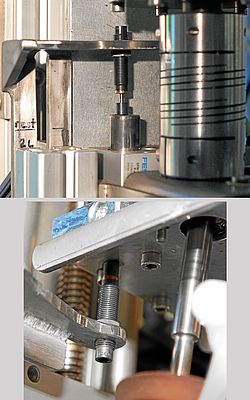 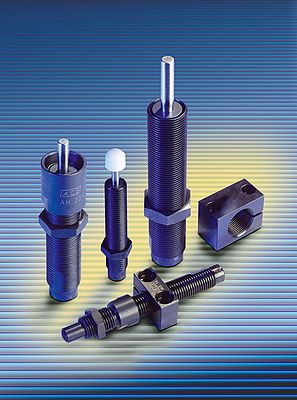 Screw caps, pump dispensers, push-pull stoppers: SONETT caps 1.4 million bottles with a wide range of tops every year - using just one machine. Capping equipment often used to result in carpal-tunnel syndrome for the operators, but inventor and builder David Fuchs made sure those processes were a thing of the past. In order to protect the machine itself, small shock absorbers from ACE Stoßdämpfer are implemented.

Since 2006, the triumvirate of the three manufacturers - the metal atelier (www.metallatelier.de) of David Fuchs, his hygiene-product-manufacturing customer SONETT OHG, and ACE - has been a successful team. Together they were able to save time and money in a project that created what is known as a universal capping machine. Ever since this special-purpose machine has been in operation in Deggenhausen, 15 km north of Überlingen on Lake Constance, it has eliminated the need for manual tightening of the caps. At the same time, major maintenance work and long downtimes for the overall construction are a thing of the past. Replacing the wear parts, for instance the small shock absorbers, on the other hand, is now as cost-effective as it is simple. Seven years ago, when the hydraulic damping elements were installed, the goal was to quickly find a reliable and satisfactory solution; now, because of increased demand, it is time for a variety of optimizations. To that end, all of the relevant data was carefully collected and evaluated over the past few months, and was then used to create two new designs.

Machine tuning with delayers
In order to identify the optimization potential for increased production at SONETT OHG, it is helpful to turn back the clock seven years. In 2006, the company began working on the system that was later patented as a screw-cap assembly machine. How it works: a conveyor belt takes bottles with caps to the capping mechanism, guided by rods. The guiding rods can be adjusted for the size of the bottle. Four asymmetrically moving rubber rollers hold the bottles and then screw the caps onto them. Another use of the system: bottles with handles can also be turned and positioned uniformly for further transport and/or loading once they have been capped. All of the functions use an MC25-EUMH small shock absorber from ACE in the upper as well as the lower stop position. "I don't quite remember how exactly we designed it at the time," says David Fuchs, the main design engineer for the capping machine and the owner of the metal atelier. As his statement indicates, the goal was simply to find the fastest possible solution. Despite the rush when it was being built, all of the participants say the damping has worked perfectly. And in terms of the upper stop position, says David Fuchs, its efficiency is almost perfect. The damping integrated into the guide skid, in the form of the ACE machine element, safely reduces the collision speed in each cycle; that allows the damper to approach its maximum lifespan of 25 million load changes. The lower damper, on the other hand, reaches just over 1.4 million strokes before it needs to be replaced. That is not because it is located on an extension arm and has an adjustable height, or because the skid stroke that defines the lower limit of the damper forces it to reach its load limit. The only reason the replacement intervals are shorter than the upper damper is that a slight bending of the arm exerts transverse forces on the damper. If the cycle numbers increase due to further optimizations as planned, the damper will thus need to be replaced more often, since the speed associated with the number of cycles will involve greater forces. This needed to be taken into account in evaluating and further developing the system.

New shock absorbers for new challenges
Because of the differing operational demands, different designs were created for the upper and lower end positions. If the moved mass (1.8 kg), the speed at the time of the collision (1 m/s) and the new assumed cycles per second (3,600) are still the same, the lower end position will need to feature a higher effective mass (13.8 kg instead of 11.3 kg), greater total energy per stroke (6.9 Nm instead of 5.7 Nm) and correspondingly higher total energy per hour (24,825.2 Nm instead of 20,405.2 Nm). These parameters showed that larger, differently functioning and longer-lasting shock absorbers needed to be built. The calculations showed a capacity utilization of 73.0 or 60.0 percent for the MC150-EUMH damper. That left the system enough room for further cycle-number increases in the future. Unlike its predecessor the MC25-EUMH, which works with a traditional grooved ring/stripper, with the MC150-EUMH damper type the reset takes place through the rolling diaphragm at very low reset forces. In addition - though it is not necessary in this case - it can be installed directly as an end position damper in a pneumatic cylinder. The problem of the transverse forces plays a much less significant role for dampers with a rolling diaphragm than in the previous model, and even compared to shock-absorber solutions from competitors. Unlike grooved-ring dampers, the piston rod here is not pressed away from the seal, so oil losses are less likely. In order to further minimize the consequences of the transverse forces, ACE suggested using a side load adapter. That allows collision angles of up to 25 degrees for any installed position. Combined with the lifespan of the new delayers - up to 25 million load changes - it can be assumed that the lower damper will require fewer replacements despite the higher cycle numbers for the capping machine. The side load adapter is one of the wide range of accessories and diverse connection parts that ACE offers, as a specialist for damping solutions of all kinds.

As David Fuchs requested, ACE ensures that its products can always be easily integrated into existing constructions. This also guarantees that dampers subjected to constant loads can be quickly replaced at the end of their lifespan. The bodies made of hardened steel, and the machine elements equipped with a piston rod made of stainless steel, are also available in nickel-plated or saltwater-resistant versions upon request. In addition, many special designs are available, for instance if especially aggressive agents in the environment are affecting the rolling diaphragm, or if the ambient temperature significantly deviates from standard room temperatures. The emphasis here is on "significantly," since even for the standard versions of small shock absorbers, the permissible temperature range is between 0° and 66° C. Thanks to the new designs, the higher cycle numbers and the expected increase in operating life, the companies working together in the case described here feel well-equipped, at least for the next few years.